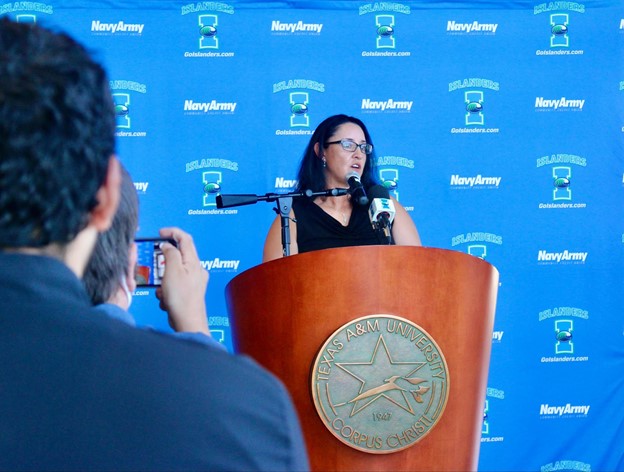 Kathleen Rodriguez talks about her excitement and plans for her new position as Texas A&M University-Corpus Christi's head softball coach at a press conference in the Performing Arts Center on Oct. 27, 2021.

Texas A&M University-Corpus Christi welcomes coaching veteran Kathleen Rodriguez as the new head softball coach for the Islanders. With previous experience from coaching at Division I, Division II, and Division III college levels, Rodriguez is bringing her wealth of knowledge and passion to the university’s softball program.

Rodriguez is a Santa Fe, New Mexico native who started out playing baseball early in her career before making the switch to softball. As her career progressed throughout high school and college, Rodriguez realized that she wasn’t quite done with the competitiveness of the game of softball that she loved and decided to pursue a career in coaching.

Jon Palumbo, director of athletics, acknowledged how Rodriguez stood out among other candidates for the head coach position.

“[Rodriguez] has built programs, she knows what it takes to win at the highest level and she knows what kind of work goes into,” said Palumbo. “She brings a blue collar mentality, level of attention to detail and grit that is just going to take us to the next level. I think the biggest thing that came across in addition to just you know the experience of building programs and the day to day work that goes into that is the passion that came across for investing in the overall development of young women. Making them better not only as players, but as young ladies who are going to go and be successful.”

Palumbo continued by saying Rodriguez is a perfect fit for the Corpus Christi community and that she will use her passion to lead the young women and help them to achieve their fullest potential.

Before transitioning to playing softball, Rodriguez made it on the boys varsity team her freshman year of high school as a catcher. Although she was initially unfamiliar with softball, she quickly grew to love the game.

Later on in her career, she earned her bachelor’s degree in exercise and sports science from St. Mary’s University, where she received an athletic scholarship by being a four-year starter. She also obtained a master’s degree in human performance and leisure sport from Eastern New Mexico University.

Rodriguez has 23 years of coaching, bringing a lot of experience to the table for the Islanders softball program. In her years of coaching, she began as an assistant coach at Trinity University in 1995, started the Schreiner University softball program and led them to the regional tournament with her husband. They were also co-head coaches from 2000-2002 at Eastern New Mexico University. Rodriguez was also the head coach at UTEP for 10 seasons and she held the program’s record for the total wins in a season. She spent the last five years as the head coach for Trinity Valley Community College and she led the program to the Region XIV East tournament championship along with making an appearance at the NJCAA national tournament in 2021.

She is looking forward to taking on the challenge of being the new head coach and reaching the goals she has set for the team for the upcoming 2022 softball season.

“I think the biggest thing is approaching every single practice with an idea of really focusing on the fundamentals of how the game is played, how the fundamentals of feeling ground ball is,” said Rodriguez. “I think by doing that, then that allows us to go into a space

where our competitive nature is going to just shine in.”

Rodriguez said she has been surrounded by so much goodness in her life and she expressed her gratitude to her parents, her husband, her children, grandparents, everyone in between, and every ballplayer who has crossed her path in her career.

“I’m excited to be here,” said Rodriguez. “I’m thrilled and humbled to be their new coach and I’m just looking forward to all the good things that are going to happen in our future.”