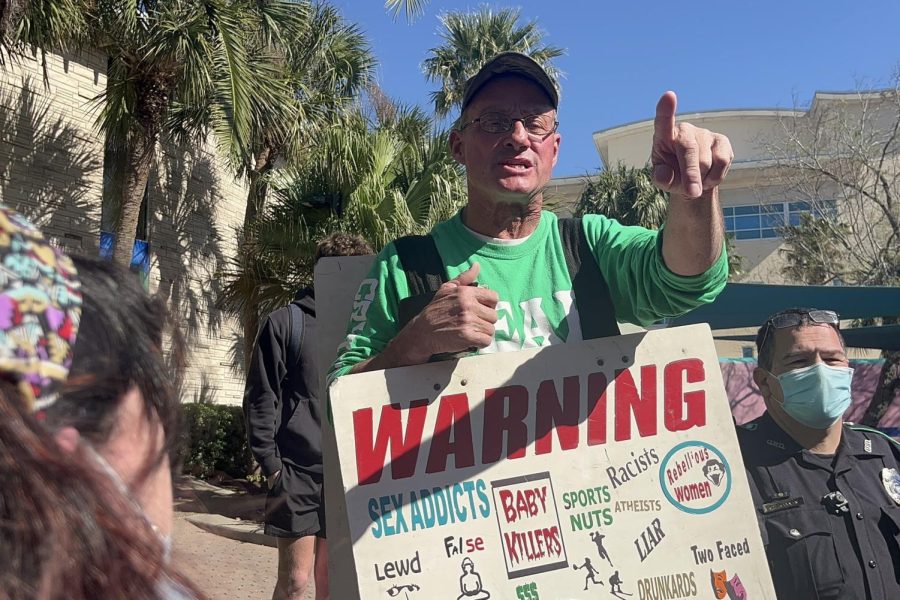 Speaking directly to the crowd, Brother Matt condemns the sins he believes run rampant within the TAMU-CC community.

On Wednesday, Feb. 9, “Preacher Man,” or as he identifies, Brother Matt, returned to the island, stirring up heated emotions and discussion regarding the limits of the First Amendment for those who attended his speech in the Hector P. Garcia Plaza.

Brother Matt arrived on campus both on Feb. 8 and 9, displaying a sign with a wide variety of descriptions regarding the people he believes are going against God, including “rebellious women,” “Mormons,” and “sports nuts.” His expressive activity focused mainly on condemning outspoken women, people in the LGBTQ+ community, and those who have had abortions.

In an interview, Brother Matt stated that “God created all men equal, but he has a pecking order too. In Scripture, he created Adam first, and then, from Adam, came Eve. Woman means ‘from man.’ That’s why I am against the feminist movement, the abortion that comes with it, and the detraction from Biblical values of what a real family is. It is not a woman and a woman, and there are only two genders.”

Brother Matt’s beliefs had students of all genders and religious backgrounds providing their own counterarguments to his preaching. Many students attempted to start a discourse with Brother Matt, but he largely ignored the crowd.

“I think that he shouldn’t be spending his entire day here and forcing hate on everybody. He has the right to say whatever he wants to say as much as we have a right to say stuff back to him, but I also believe that what he is doing is inciting a public outcry,” stated Kaitlin Miller, a sophomore marketing major.

Miller comes from a Christian background but left the religion due to her conflicting values with it. However, it was not just individuals who do not identify as Christians that were outraged at Brother Matt’s convictions.

“What he was saying was from the Bible, but what he was doing was taking the scripture and twisting it into his own words so he can hear what he wants to hear,” stated Jossette Gonzalez, a freshman biology major and member of the New Life Church in Corpus who actively spoke against Brother Matt.

“He was spreading hate. It wasn’t love and that is not what God is about. Technically he had the right to say what he wanted to say, but us Christians do too,” Gonzalez continued.

John LaRue, TAMU-CC’s Chief Ethics and Compliance Officer, acted as a voice of reason between the two sides of the “expressive activity” which had taken place on campus upon the return of Brother Matt.

In a phone interview, LaRue stated that, as a public university, TAMU-CC is “not allowed to endorse religion, but is required to allow expressive activity. The university cannot discriminate based on the context of both religious and non-religious activity. Students should continue to engage in respectful forms of expressive activity and respect others’ rights, even and especially when they disagree with them.”

LaRue cited University Rule 08.99.99.C1 as the campus’s Expression Act, which guides what is and is not protected by the First Amendment and TAMU-CC’s campus policies.

While the discussion and activity seen in Hector P. Garcia Plaza were controversial, it was all within the rights given to United States citizens. For more information regarding free speech and expressive activity within TAMU-CC, visit https://www.tamucc.edu/governance/rules-procedures/assets/08.99.99.c1-expressive-activity-on-campus.pdf.