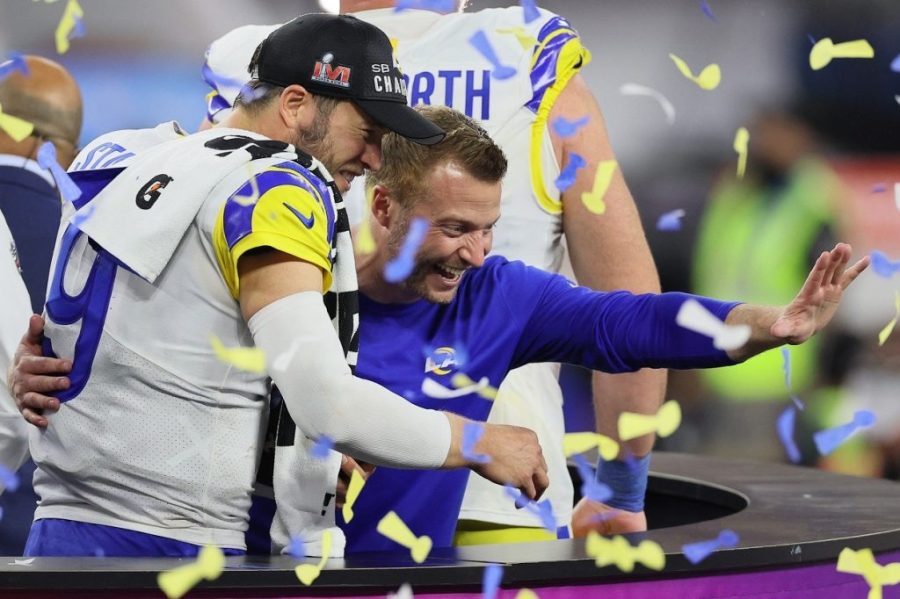 After winning big, Los Angeles Rams quarterback Matthew Stafford (left) and Head Coach Sean McVay wave to their teammates and family, celebrating during the presentation of the Vince Lombardi trophy.

The Los Angeles Rams not only defended a home field advantage, but also managed to win it all on the biggest night of the NFL.

After a hard-fought game on both defense and offense, the Rams managed to defeat the Cincinnati Bengals 23-20 at SoFi Stadium in Inglewood, CA for Super Bowl LVI, being the second team to win at their own stadium, with the first being the Tampa Bay Buccaneers last season.

This marks the Rams’ second franchise win as well, with their first back in 2000 while they were still known as the St. Louis Rams. It is also a first championship win for Rams quarterback Matthew Stafford, who was traded by the Detroit Lions back in 2021.

This season however, with the unexpected matchup and no Tom Brady or Patrick Mahomes in the mix, many found the idea of either team winning the big game to be a huge achievement in their books, including the Professor of Media Arts, Ethan Thompson.

“I just wanted a good game,” Thompson said, “I wanted good television, I was cheering for the Bengals most of the time, but then I was fine with how it worked out.”

Junior media production major Jonathan Bell would have been satisfied if the Bengals won, solely because of their quarterback Joe Burrow, he was pulling for the Rams to come up with the win because of their newly acquired wide receiver, Odell Beckham Jr.

“I like both teams, I wanted to see OBJ play the whole game and not get hurt, but he got a touchdown before he got hurt,” Bell said, “I wouldn’t have been mad if Joe Burrow played and got a ring, because he played his behind off last night.”

Both teams fought to the end, but it was the Rams’ defensive tackle, Aaron Donald, who sealed their victory by spinning Burrow to the ground, making him throw an incomplete pass at fourth and one. This came as a surprise to Thompson, considering how almost each playoff game ended on a field goal.

“I thought, given the way the other playoff games went, I thought what was going to happen was Cincinnati was going to score a field goal and it was going to go into overtime,” Thompson said.

Given how thrilling each season was, from the Bengals beating the Kansas City Chiefs in overtime at Arrowhead Stadium, to the Rams making Tom Brady retire without an eighth Super Bowl ring, Thompson added that this season made for good television because of the fresh faces at the big game.

Bell also added that next season he hopes to see his team, the Atlanta Falcons, win it all without suffering another recreation of the infamous 28-3 comeback the New England Patriots pulled back at Super Bowl LI.