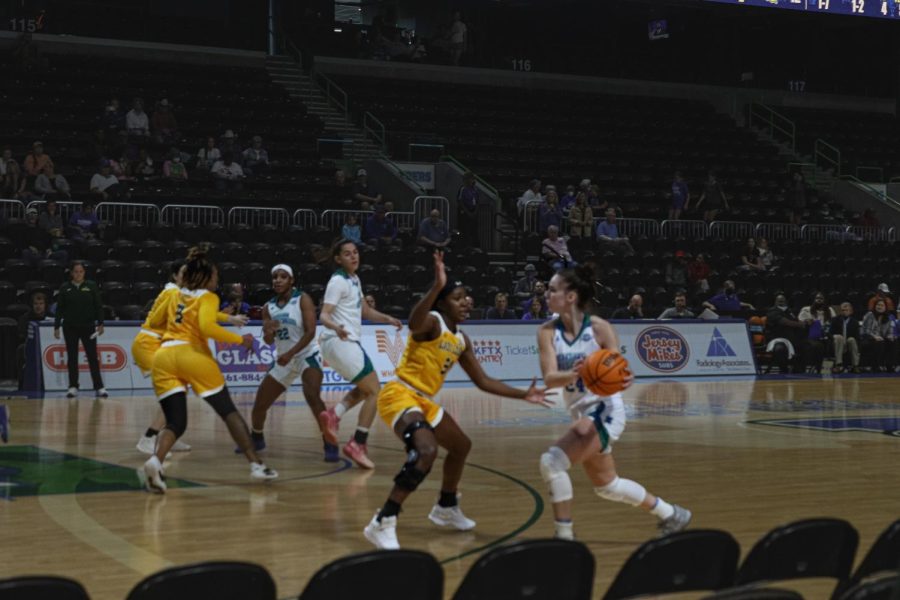 Hayle Campbell dribbles the ball to the hoop as the opposing team surrounds her.

The TAMU-CC women’s basketball team battled it out against the Southeastern Lions for a 57-50 win to kickstart the Homecoming Week sporting events.

Though both teams struggled with landing the ball in the basket, the Islander’s aggressive defensive tactics pushed them over the edge against the Lions. Along with the defensive side of the court, the Islanders were 19-23 from the free throw line, while the Lions were only 5-8.

“We had a lot of people make positive contributions to get it done, but if we did not play spectacular defense, we would not have been in that position. I was very proud of the team effort to keep Southeastern at bay on a night when we were struggling to put the ball in the hole,” Coach Royce Chadwick stated in a postgame press conference.

“We are being more physical on offense and defense. Everybody knows our plays by now, but we just have to stick with them, be aggressive, and take the shots that we have,” Serrata stated.

The Islanders are the only team in the Southland left standing with one win. This record puts them at a significant advantage closing out the season and combats the “February slump” that head coach, Royce Chadwick, commented on.

“It was a slugfest, and late February ‘we know your play.’ They were anticipating very well what we were going to do. I was very proud of the fact that we showed a lot of grit and tenacity to finish the basketball game,” Chadwick expressed.

With a two-day turnaround before their Homecoming game against Northwestern State, Chadwick asserted that swift adjustments will be vital for the Islanders to reign victorious against their opponents.

Islander’s women’s basketball will return to the American Bank Center for Homecoming on Saturday, Feb. 19, to face the Northwestern State Demons. Tip-off will be at 1 p.m., with the Islander Block Party following at 3 p.m. and the men’s game at 5 p.m.