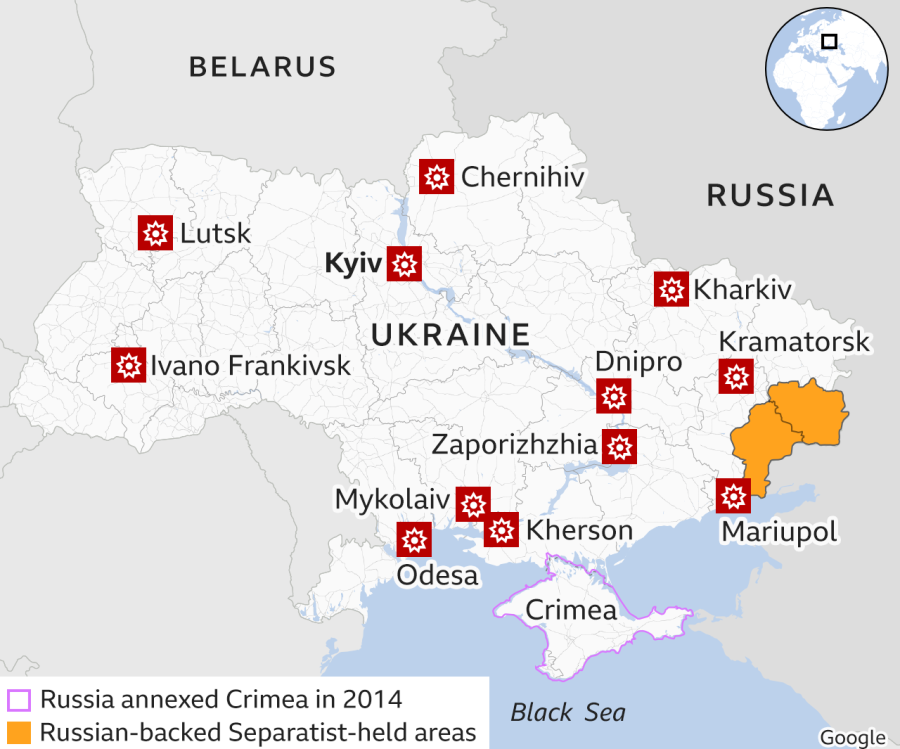 Explosions have been reported all across Ukraine as Russian forces begin landing troops on Ukrainian territory. BBC reports an echo of bullets and strikes have been heard in Kryv, the city’s capitol and in Kharkiv, the largest city in the country.

After weeks of saber rattling, Russia has invaded Ukraine in what is being described as a full-scale war.  President Vladimir Putin addressed the Russian nation a little before 6 A.M (Moscow time), declaring a demilitarization of Ukraine. Several explosions have been seen and heard in Kharkiv, Dnipro, Odesa, Kramatorsk and in Kyiv, the capital city of Ukraine. The events are now being described as coordinated attacks.

The invasion comes after President Putin’s earlier statements that there were no intentions of waging war or launching an invasion on Ukraine.

In a phone call between President Joe Biden and Ukrainian President Volodymyr Zelensky, Biden revealed that “He (President Zelensky) asked me to call on the leaders of the world to speak out clearly against President Putin’s aggression, and to stand with the people of Ukraine.” Biden says the United States is working closely with the United Nations Security council to “rally international Condemnation.”

Dmytro Kuleba, Ukraine’s foreign minister, took to Twitter declaring that president Putin had “started a full-scale war against Ukraine… Strikes continue on peaceful Ukrainian cities. This is a war of aggression.”

According to Ukraine’s Interior Ministry, Russian troops were witnessed crossing the border into Ukraine territory and had landed in Odesa. The Independent, a European news source, reported at least 40 people killed in the invasion so far, with several others wounded.

As of now, President Zelensky has declared martial law across the country and is permitting authorities to hand out weapons to civilians willing to defend Ukrainian territory. Ukraine’s military reserves have also been drafted.

The U.S and other several European countries have already referred to this act of aggression by Russia as the beginning of a full-scale Ukrainian invasion, however, it is yet to be determined whether the offense will be considered an act of war that forces the North Atlantic Treaty Organization, or NATO, alliances to unite in an orchestrated defensive attack. This is because NATO has no legal obligation to help defend Ukraine against the Russian invasion because the country did not sign the official alliance treaty back in 2014.

President Putin has made clear his firm disapproval of Ukraine joining the NATO alliance. The U.S and European countries’ encouragement of Ukraine’s solidified membership in NATO was one of Putin’s largest complaints. In a press conference, he stated “This is that red line that I talked about multiple times… They have crossed it.”

As the conflict intensifies on Ukraine’s inner cities and 1,200 mile border, many “separatists,” (a coined term used to reference civilians who support Russian influences that are mostly located on the border between Russia and Ukraine) have not expressed any discontent with the invasion as of now.

At least one-third of the Ukrainian population speaks Russian, and many travel across the border for work every day.

According to President Putin, the goal and a reason for launching an attack on Ukraine was “to defend people who for eight years are suffering persecution and genocide by the Kyiv regime,” an accusation circulated by Russian officials that Ukraine had been ethnically cleansing civilians in known separatist regions. This is an allegation that has been categorically denied because of a lack of any evidence, according to the New York Times.

“Anyone who tries to interfere with us, or even more so, to create threats for our country and our people, must know that Russia’s response will be immediate and will lead you to such consequences as you have never before experienced in your history,” President Putin said.

President Biden stated that Putin has chosen to create a war that will produce a “catastrophic loss of life and human suffering… Russia alone is responsible for the death and destruction this attack will bring, and the United States and its allies and partners will respond in a united and decisive way. The world will hold Russia accountable.”