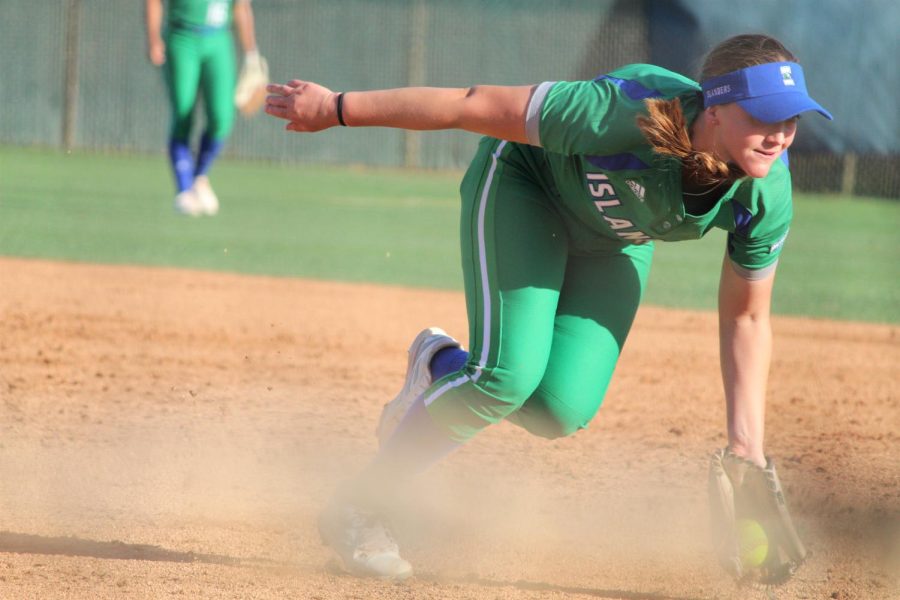 Junior second baseman Mackenzie Purcell grounds the ball to throw out the runner on first base.

The Texas A&M University-Corpus Christi softball program secured their conference series win by taking down Northwestern State at home this past weekend.

The Islanders lost game 1 in the doubleheader on Friday but managed to make a comeback and win the next 2 matches to conclude the series.

“We bounced back from it and we won the next game [by making] all the adjustments we needed to,” Egan said.

During Friday’s doubleheader, the first game went into 12 innings while both teams battled back and forth to score another run to end the game. In the first 3 innings the Islanders were in the lead, but the Demons caught up to tie the scoreboard at 1-1. Both teams kept fighting to bring a run in and eventually the Demons escaped with a run to finish the game with a score of 2-1.

Game 2 allowed Northwestern State to score a run in the top of the third inning, but TAMU-CC stepped up to the plate to bring in 3 runs in the bottom of the fourth inning. The Demons caught up in scoring 2 more runs to tie the score 3-3 and go an extra inning. Later on in the seventh inning, junior Pal Egan made contact with the ball to hit out to left field, allowing sophomore Gabriella Torres to score and end the game with a 4-3 win.

“We just have to continue to make adjustments [with] each bat,” Egan said. “[We have to] learn from our mistakes on the defense side and then keep our energy up.”

Head coach Kathleen Rodriguez was proud of the Islanders’ effort throughout the games during this weekend’s series. In the second game, Rodriguez spoke on how the pitchers did well and how sophomore Audrey McNeill handled herself well when she came into pitch at the end of the game.

“That’s a tough thing to ask somebody to come in when the game is tight,” Rodriguez said. “I thought she did a really good job of coming in and taking care of us.”

In the final game of the series, TAMU-CC scored all 5 runs in the third inning and allowed Northwestern State to score a single run. The Islanders kept up their defense in preventing the Demons from attempting to score when bases were loaded in the sixth inning and managed to conclude the series 5-1.

The Islanders will be facing Prairie View A&M on April 12 for a doubleheader in Prairie View before heading to Houston to face HBU on April 15 for a conference series.