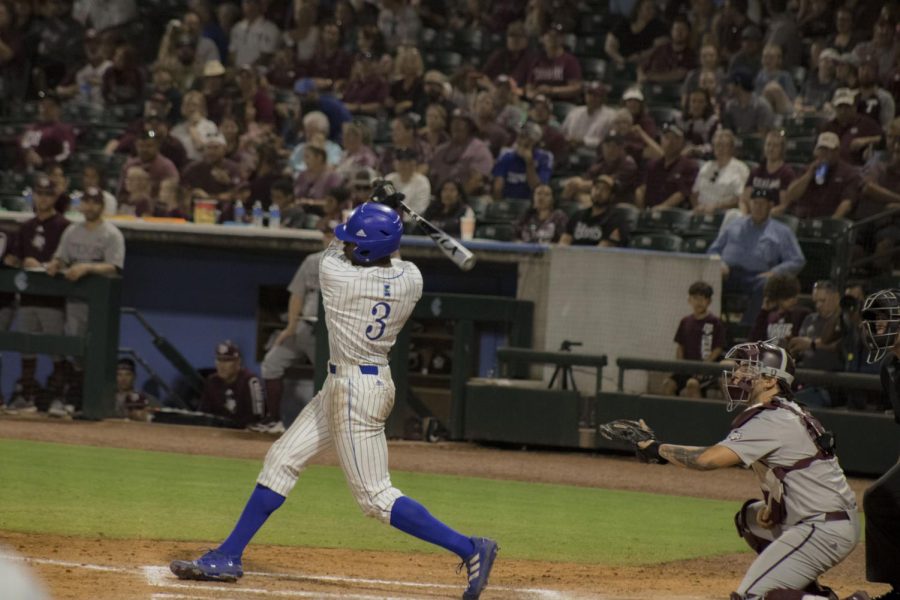 Jones is up to bat again, hoping to score his second run of the game.

TAMU-CC baseball faced the TAMU Aggies at Whataburger Field on Tuesday, April 12. The Aggies won 5-3, but not without an intense fight from the Islanders.

The Islanders gained an early lead with a first-inning score on a wild pitch by sophomore Tre Jones. In the third inning, the Islanders expanded their lead through an explosive two-run homer by sophomore Josh Caraway, bringing in junior Leo Markotic. This allowed the Islanders to have a 3-0 lead to start the game.

“We really wanted to jump on them early,” Caraway said in a postgame interview. “We threw the first punch, and as a team that’s what you want to see. I think we just have to throw that next punch in the middle of the game, and the last punch at the end.”

Starting pitcher for the Islanders, Cassius Shy, allowed four hits and no runs during his 3.1 innings on the mound. However, the Aggies made a comeback in the fifth, tying the game 3-3. In the sixth and seventh innings, the Aggies accumulated two more runs.

“It’s a fine line on the defense. We have not been playing great defense, it is our Achilles heel,” said Coach Scott Malone in a postgame interview. “It’s kind of like the monster in the closet.”

The Islanders now have a record of 16-18, but Malone does not believe that reflects the team’s true ability. “We’re a good team. It doesn’t feel like it and, if you look at our last ten games, it doesn’t smell like it. I’m not surprised it was 3-0 tonight,” Malone said.

The Islanders’ next game will be on campus at Chapman Field on Thursday, April 14, and will be free for students who bring their SandDollar ID. The 6:00 PM first pitch can also be viewed through ESPN+. It will be the first game out of three against HBU this upcoming weekend.