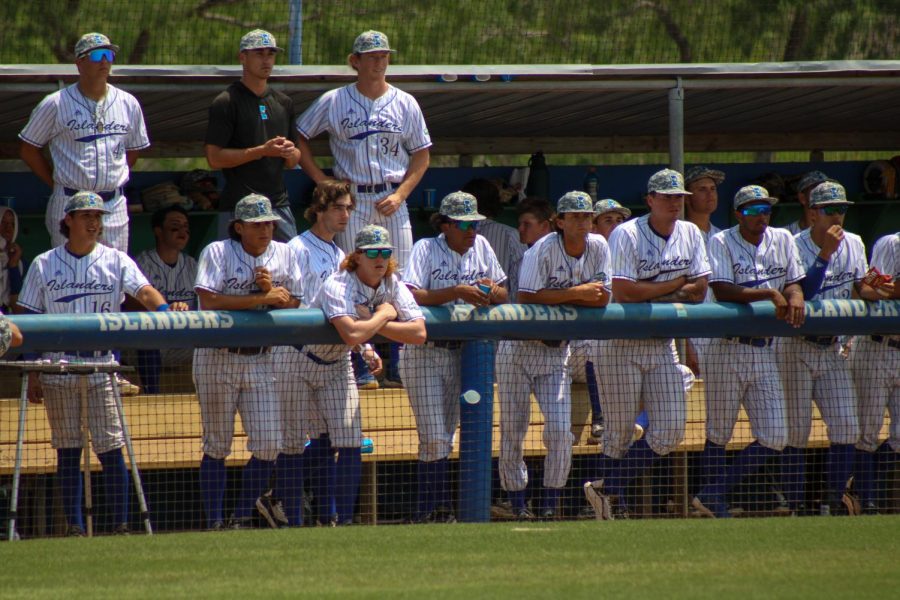 The dugout watches as the Islanders attempt to battle back into the game.

The Texas A&M University-Corpus Christi baseball program started off their Southland Conference HBU series at home this past weekend at Chapman Field.

The Islanders started off with a 17-3 mercy rule win in game one and fell in the last two games to end the series.

In game one, TAMU-CC was able to get a run in the first inning and brought heat to the plate within the second inning to score nine runs with their batting.

“We get nine runs in the second, and I think everybody kind of exhales that this might be our night,” said Head Coach Scott Malone. “When you score like that early, it gives everybody a sense of confidence. It sets the tone for the rest of the night.”

During the second inning, Senior Brandon Petkoff hit a homerun and had four RBIs (run batted in) to bring his team in to score. Sophomores Tucker McEnroe and Max Puls both had two RBIs, including three hits that allowed them to advance in scoring.

“[HBU] was a really great team,” said sophomore Tucker McEnroe. “We were swinging really well and played great defense behind freshman Zach Garcia. We really [were] seeing the pitches up, seeing it big, and sticking it to a right center approach. It turned out to be our way. We love that everytime it happens.”

In game two, the Islanders went nine innings with HBU, but fell 3-5 as they attempted to score towards the end. In the first inning, the Islanders kept making a few errors that resulted in HBU scoring two unearned runs. Senior Steven Rivera-Chijin and sophomore Tre Jones were able to tie the score 2-2, and were in the lead 3-1 in the fourth inning when sophomore Max Puls scored. However, the Huskies scored two more runs at the top of the eighth inning, and TAMU-CC wasn’t able to catch up.

Game three had the Islanders up on their feet, with HBU scoring run after run in the first few innings and finishing the game 11-5. Five Islanders took the mound to pitch during the game as they each tried to hold the Huskies from scoring.

Malone addressed how it was a rough weekend for the team and how they’ll have to figure out how to get better in these few days before their next game.

“We got to play better baseball,” Malone said. “There’s basically three aspects to it: offense, defense, and pitching. We’re not doing any of those at a high level. We’re in a bad rut, a three week rut, we gotta get it turned around.”

The Islanders will be facing Prairie View A&M in Prairie View on Wednesday, April 20 for a non-conference game before their away series with New Orleans this weekend.