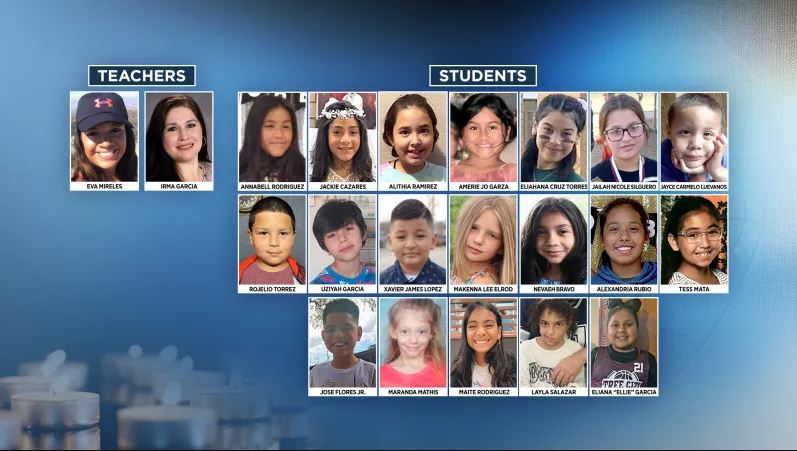 The 2 teachers and 19 students who were killed in the mass shooting at Robb Elementary School.

On Tuesday, May 24, 18 year-old Salvador Ramos shot and killed 21 people at Robb Elementary School in Uvalde, Texas. Ramos arrived at the school at 11:28 a.m., but police didn’t announce the shooter was in custody until 1:06 p.m.

At 11:00 a.m., the shooter fires a bullet into his grandmother’s face, then takes off in her vehicle to Robb Elementary School. When he arrives at the school, he crashes the car in a nearby ditch, which he later climbed out of and began firing his guns at witnesses at the scene.

As Ramos makes his way to the school building, a teacher calls 911 to notify Uvalde police about the car crash and the shooter walking across the school parking lot, guns in hand. Ramos fires at the building several times before entering.

Salvador Ramos is responsible for the deaths of 19 students between the ages of nine and eleven, and 2 teachers. About an hour and a half after the attack had begun, a Border Patrol Tactical Unit officer shot and killed Ramos.

Going to school and receiving an education once symbolized promise and hope for a better future. Today, it symbolizes a death sentence. Statistics are now showing that firearms are the leading cause of death to children in America, closely followed by automobile accidents.

After the shooting at Robb Elementary school, many other schools nearby had been receiving threats of school shootings. Brianna Mota, a history teacher at King High School, shares her experience of working during a time when a threat was being made against King High School. “King High School earlier in the year actually had a shooting threat that ended up being a hoax, but students did not really show up that day. Well I had to work anyway, and some kids did come to class. That same day the supposed ‘shooting’ was gonna happen, a power outage happened and the fire alarm went off and it frightened the kids.” Mota said.

Mota and her students came up with a plan to stay as safe as possible if anything were to happen. “Keeping those kids safe in that moment was my main priority, and knowing that we were so close to a main door was frightening,” Mota said.

Due to the increase in threats being made against schools and the surge of school shootings, it’s also seen that the expectations for teachers may come at a greater risk. Teachers are now not only expected to teach students, but also sacrifice themselves to keep our children safe. “I feel that the expectation for teachers has changed in the aspect of now that we have to protect our own lives and kids’ lives that aren’t even our own. I would certainly do it, but no one goes into teaching thinking they’ll need to save kids in a life or death situation,” Mota said. In today’s day and age, teachers are not only seen as our mentors, but also as our protectors.

Not only does Mota understand this situation from a teacher’s perspective, but she also understands it from a parent’s point of view, being a mother herself. “It frightens me definitely. I wish schools and lawmakers can put our children first,” Mota said.