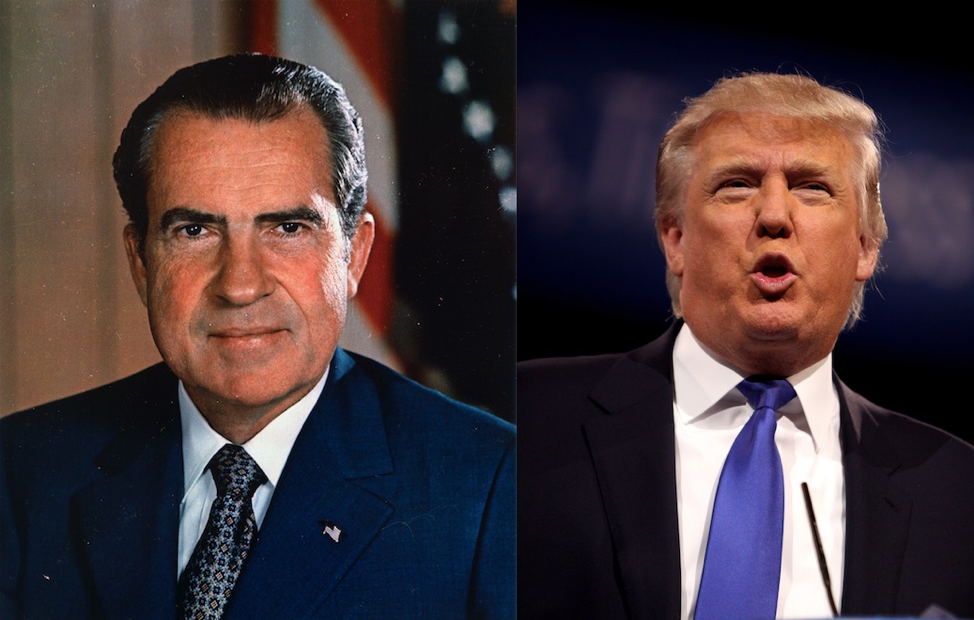 Image courtesy of washingtonmonthlycom/WASHINGTON MONTHLY Presidents Nixon and Trump both famous for their relationships with media.

Image courtesy of washingtonmonthlycom/WASHINGTON MONTHLY Presidents Nixon and Trump both famous for their relationships with media.

Trump and Nixon: presidents vs. the media

Trump picks up where Nixon left off.

Donald Trump is not the first Republican president to declare war on the media. The Trump Administration’s manner in addressing the press are reminiscent of a similar media blaming president, Richard Nixon.

Both presidents have been media magnets since the beginning of their campaigns. According to an article by The Washington Post, “In part, Trump can thank Fox News — and Nixon. Despite its skirmishes with Trump, Fox News spent years helping the casino magnate transition to politics by giving him a national platform to opine on public affairs.”

During his term as president, Nixon actively attacked the media harsher than any other president in U.S. history. According to the same article, Nixon had illegal wiretaps placed on reporters who opposed his administration. Nixon also had his Justice Department file anti-trust charges against three television networks, accusing them of monopolistic practices.

Nearly six decades later, Trump follows in his footsteps. The recent scandal with President Trump and CNN’s Chief White House Correspondent, Jim Acosta, is a another very public and sensationalized case of Trump versus the media. Trump repeatedly attacked Acosta and CNN on national television, telling Acosta, “I think you should let me run the country. You run CNN,” said Trump, “and if you did it well, the ratings would be much better.” The recent feud involving the Trump Administration and Acosta has landed the President in court.

“I can definitely see similarities between the two,” said Chris Johnson, senior Political Science major. “Nixon was known for being very aggressive and assertive. Donald Trump behaves similarly. I’m not surprised why the two presidents and media mutually dislike one another.”

During his term as president during the 1960s, Nixon would lay the groundwork for the way some presidents behaved with the media. According to an article by theAtlantic.com, “Intimidating journalists, avoiding White House reporters, staging events for television — now common presidential practices — were all originally Nixonian tactics.”

Trump’s favorite method to attack the media is through social media. Trump often takes to Twitter to share his thoughts and feelings of media outlets.

On Nov. 19, 2018 President Trump tweeted “The Fake News is showing old footage of people climbing over our Ocean Area Fence. This is what it looks like — No climbers any more under our Administration!”

Many of his supporters celebrate his often outlandish comments.

“I love that Donald Trump speaks his mind,” said Leticia Ann, Republican and Donald Trump supporter. “He is so funny! Every time I see his posts on Twitter and the things he says in his press conferences. Very entertaining and always right on many issues.”

Both presidents are iconic for their bold stances against the media. Nixon will always be the first president who went to great lengths to oppose the media. After voters rejected Nixon’s bid to become the governor of California, the former president famously stated, “You won’t have Nixon to kick around anymore, because, gentlemen, this is my last press conference.”