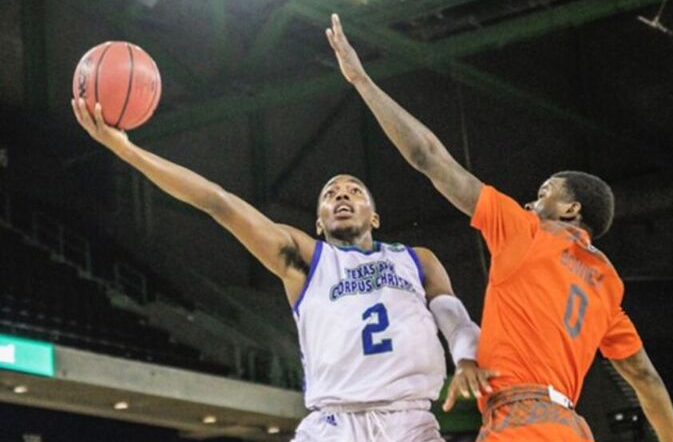 They shoot, they score! The TAMU-CC basketball program is ready to show the Southland Conference what the Islanders are made of. Both the women’s and men’s basketball teams are off to a great start and are planning to keep it that way through the season.

This year, both teams are setting a high goal of becoming a mid-major breakthrough team. With the help of fans attending games regularly for support, and with consistent motivation during practice, their goal will become a reality.

“We want to win the Southland and we can,” said Emma Young, a junior in Pre-Nursing. Young is from Nicholasville, Ky. and has been playing for TAMU-CC for  three years. Young had an outstanding record in her 2017-2018 season, playing all 27 games, starting in 26 games and averaging 12.3 points per game. Not only were her points outstanding, but it also led her team with averaging 7.3 rebounds per game.

With the semester approaching its end and the season just starting, these players are doing the impossible to stay both mentally and physically strong in classes and on the court.

“Being a student athlete takes up most of my time,” said Young. “When I am not in the gym working, class or studying, all I want to do is sleep and hangout with my dog. I really don’t have a lot of time for a social life. I am always in my teacher’s office and that’s how I stay on top of my stuff. The big thing is to stay focused, keep your eyes on the prize and don’t lose sight. That’s how I do it. I know what is most important and I stay with it.”

Giana Wright, a sophomore from Castro Valley, Calif. majoring in Psychology, has been playing for TAMU-CC since her freshman year. Wright started three games with 28 appearances, which showed her true dominance averaging 1.4 points per game and 1.3 rebounds coming off the bench.

“I think the biggest opponent in our conference is ourselves,” Wright said. “We have an extremely talented roster and the ability to play at very high level, and we are the only ones who can beat us. As long as we execute and are the toughest ones on the court, we’ll be a really hard team to beat.”

The Lady Islanders have been playing amazing games that will lead them to develop strong skills as a whole team.

“Being a student athlete is definitely a matter of time management and balance,” said Wright. “My time is limited, so being organized and planning things out in advanced is what helped me stay successful within my classes. But I make it a point to find time for my social life and time to step back from everything. The down time is really important for myself and my mental health.”

Not only are the Lady Islanders keeping their goals settled and finding their time to be successful on and off the court, it seems that the men’s basketball team is going in the same direction.

Last season, the men’s basketball team had an overall record of 11-18 and a conference of 8-10. Even though star player Joseph Kilgore is gone, the team is still ready and well-developed to take on their conference this year.

“Our hopes for conference are to win the league and be a mid-major breakthrough team,” said Myles Smith, a sophomore in Communications and Media Studies from Houston, Texas. Smith appeared in 26 games and started in 17 games last season. He averaged 7.8 points per game, 2.6 rebounds and 1.9 steals. This season, Smith is showing that he can be unstoppable by being the point guard of the team.

“As a team, we’re working on being disciplined and sticking to what we do,” said Smith. “We got a lot of talented guys. We’re trying to find the perfect rhythm, and our biggest opponent is ourselves because when we’re on the same page, there’s nobody that can beat us in the Southland.”

Being the point guard of the team and managing school life can be very stressful, but at the end, there is always ways that these players can succeed.

“As a student athlete, were under a spotlight at all times,” said Smith, “so we have to represent the team and the school on the court, as well as in our social life. The practice schedule and traveling makes it stressful for us to stay caught up, but a lot of times professors will work with us and classmates keep us up to date with assignments.”

These players work hard both in court and the classroom. There is no doubt that their goals will be accomplished and that the Southland Conference will be theirs.