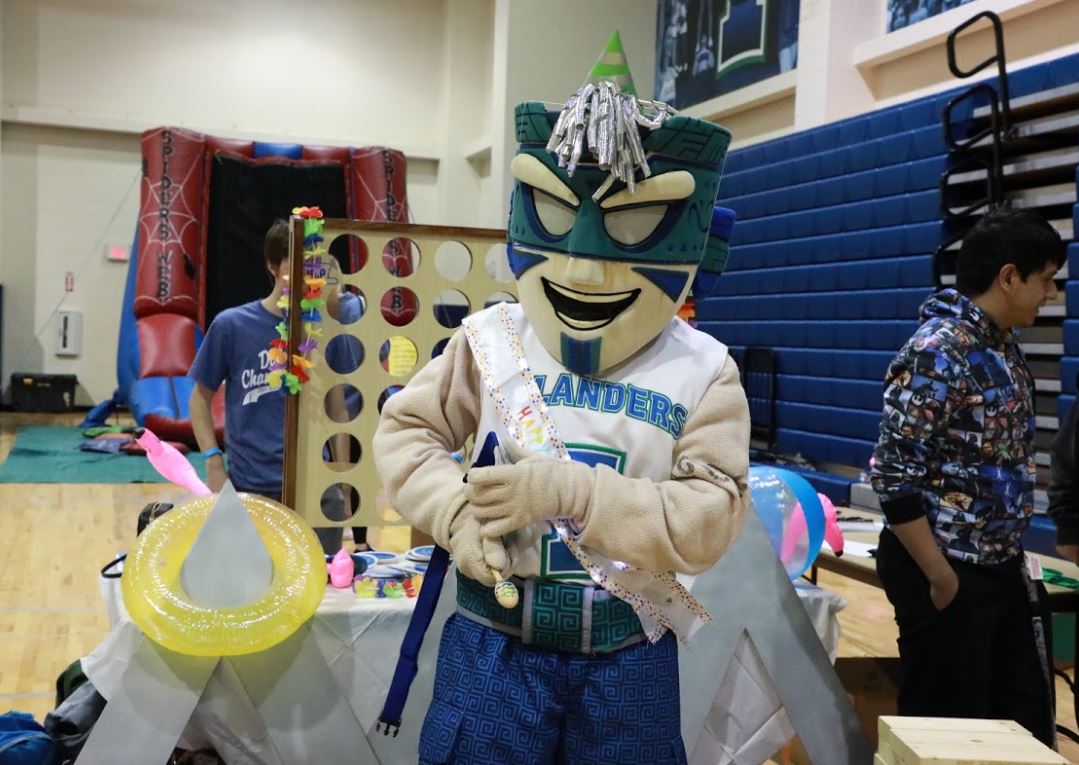 Courtesy of Arianna Aloia/ Island Waves. Izzy celebrated his 15th birthday this year. Even though there was no official announcement about his change of skin color, recent Izzy is noticeably whiter than earlier editions. (.)

Courtesy of Arianna Aloia/ Island Waves. Izzy celebrated his 15th birthday this year. Even though there was no official announcement about his change of skin color, recent Izzy is noticeably whiter than earlier editions.

Izzy: a mascot appropriating cultures since 2004

The first time I saw Izzy the Islander in his infamous glory was during a basketball game. He skipped around the basketball court, high-fiving people and throwing shakas. I noticed his tribal mask, tattoos and various accessories and wondered: Where did Izzy even come from? Why was he selected to be the representative of our campus? This took me on a journey through TAMU-CC’s history that left me with the answers I needed to be able to firmly say, “Izzy has got to go.” Here’s what I found:

TAMU-CC didn’t have a walking mascot for decades. I met with Shelby Gonzalez, Library Specialist II in Special Collections, who informed me that TAMU-CC was first created in 1947 under the name of Arts and Technological College (ATC). That fall, the college moved to Ward Island and became the University of Corpus Christi (UCC) and chose the tarpon as their mascot/symbol.

After visiting with Gonzalez, I became inspired to start digging through Island Waves’ extensive archive, starting all the way back from our publication’s beginning in 1993. I scoured through dozens of articles, trying to search for an image of this supposed tarpon mascot. That’s when I found an article published on Aug. 31, 1995 asking for students to submit designs for a new mascot, offering a $500 cash prize to the winner. This is where the interesting and complicated story of our mascot begins. 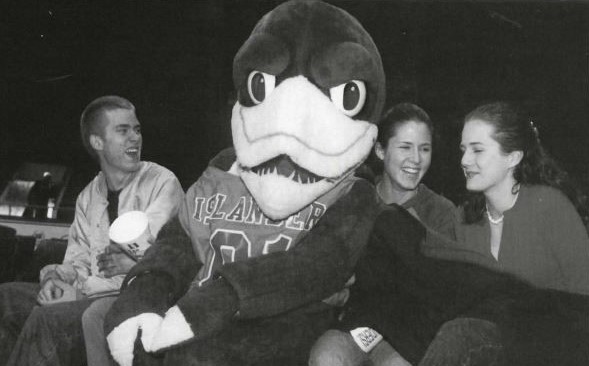 Not only were TAMU-CC students, staff and faculty asked to cast their votes on the mascot in Feb. of 1996, but the campus invited the community of Corpus Christi to weigh in, too. Some members of the community were concerned that TAMU-CC would be portrayed as a “party school.”

Ultimately, the contest winner designed a scowling tarpon in a sweater, but this was later changed by the design company Morehead, Dotts and Laporte. After a meeting between the Mascot Advisory Committee and the then TAMU-CC President Robert Furgason, it was decided that the mascot would be called the Islander and the Islander would represented by a tarpon.

Seems like everything was put to bed, right? Nope. Months later, the new mascot hadn’t been released and people still voiced their concerns, the most prominent being that the new mascot looked too masculine. But by the time the last meeting between the Mascot Committee and the president occurred, everyone was comfortable with the new tarpon mascot.

The tarpon made its debut on Nov. 13, 1997. It was several months before students were chosen to don the suit, and it was even longer before the mascot was given a name. It seemed that students just started calling it “Tarpie” and the name stuck. 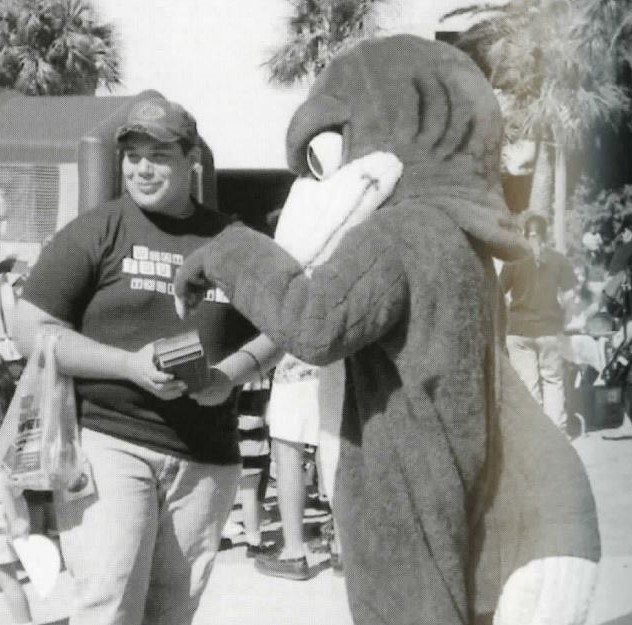 So, what happened to this loveable, sharp-toothed fish? Why was Tarpie changed to Izzy? It’s simple, really: branding. On Oct. 21, 2004, Jo Anna Benavides-Frank, the then Assistant Director of Student Activities, said, “People weren’t recognizing what the mascot was.” I mean, who could blame them? Tarpie did just look like a scary, bird thing with blue fur, angry eyebrows and weird flipper feet. 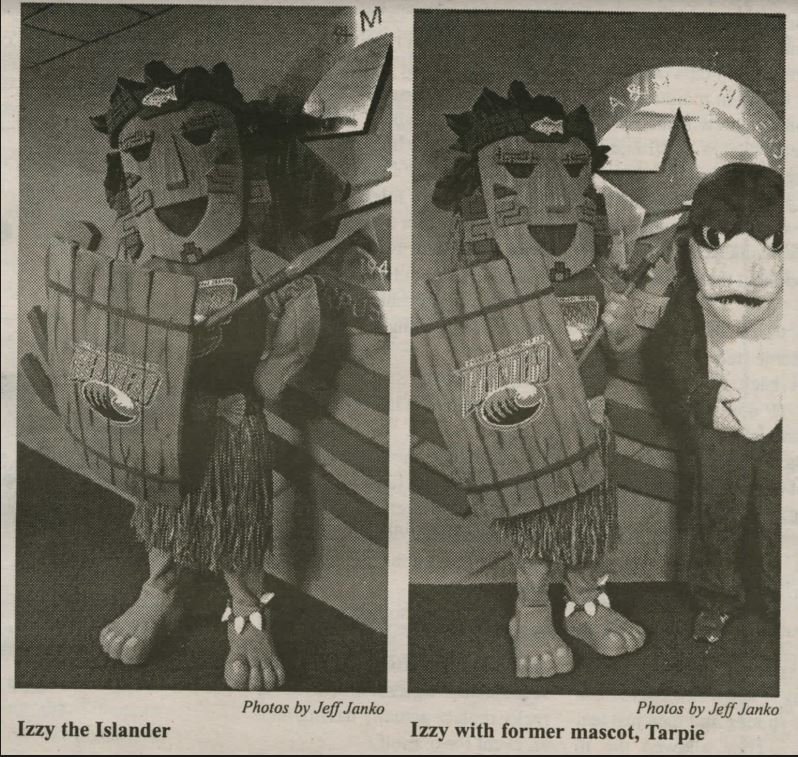 Did they have to completely change the mascot, though? And to a completely different mascot who was sporting a shield, spear, grass skirt, tooth accessories and tribal mask, to boot? That’s when I found an article from 2010 that dived a little deeper into the thought process behind Izzy.

A focus group of alumni and staff was created under the guide of Benavides-Frank. The focus group mused over several possibilities, including “a laid-back surfer sporting Islander gear, a new beefed up tarpon, a rock-bodied Polynesian from the island of Rapa Nui, and the tiki-masked islander named Izzy.” Because, yeah, it makes total sense that a caricature of people who live 4,000 miles away from here should be our representative to cheer on the ball tossers. Ironically, Benavides-Franke said in the article, “We didn’t want Izzy being associated with one certain cultural background. We wanted him to be accepted by everyone.” 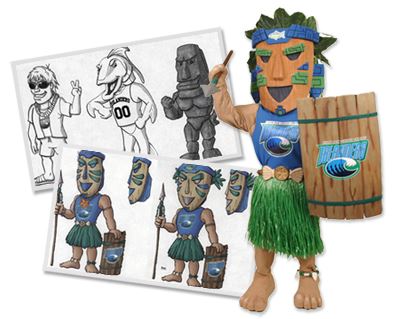 Oh, dear reader, the evolution of Izzy doesn’t stop there. According to The Izzy Recharge Project, Izzy went under the branding knife again, with the help of a Canadian company because who better to create an “islander” image?  The result:  a “leaner, cleaner, and packed with Islander pride” Izzy debuted on Dec. 1, 2011. He dropped the shield, spear and grass skirt, replacing them for board shorts, padded biceps and “killer bling.” 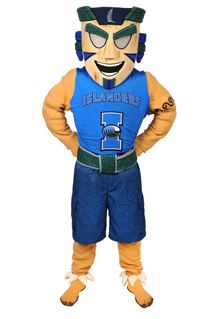 Later, this orange, testosterone fueled character, that clearly is a reference to a Pacific Islander, was phased out with the whiter Izzy that we all currently see at campus events. There was no official announcement of the “revised” Izzy.

My pursuit for more information left me feeling unsatisfied and questioning more. It seems that the only reason why Izzy was created was to fulfill a corporate need for a more streamlined appearance and easy recognition. Why we had to appropriate bits and pieces from the Pacific Islander culture that has nothing to do with South Texas, besides advertisement, is beyond me. Why were we so concerned with appearing to be a party school while not worried at all about cultural appropriation? And why was tangerine Izzy changed to white Izzy? I think it is time for the student body to question if Izzy accurately represents the entire TAMU-CC population.

Of course, some would argue that Izzy is now ensconced as our mascot and is all in good fun.

I say Izzy is an outdated representation and is the exact definition of cultural appropriation. It’s time for a change.

4 Responses to “Izzy: a mascot appropriating cultures since 2004”