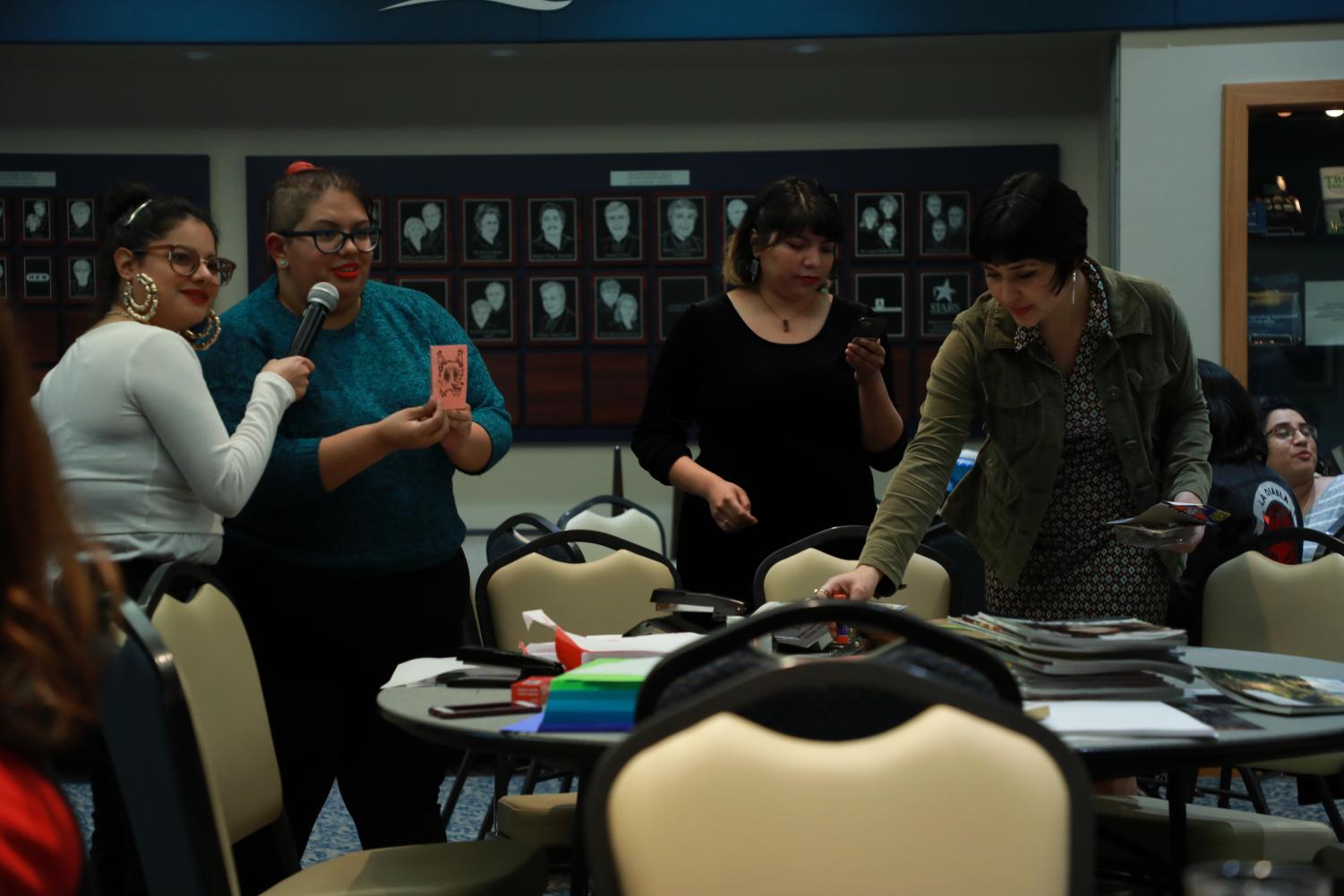 All three of the zine’s are designed to uplift and support women, furthering the feminist movement that has paved the way before them. 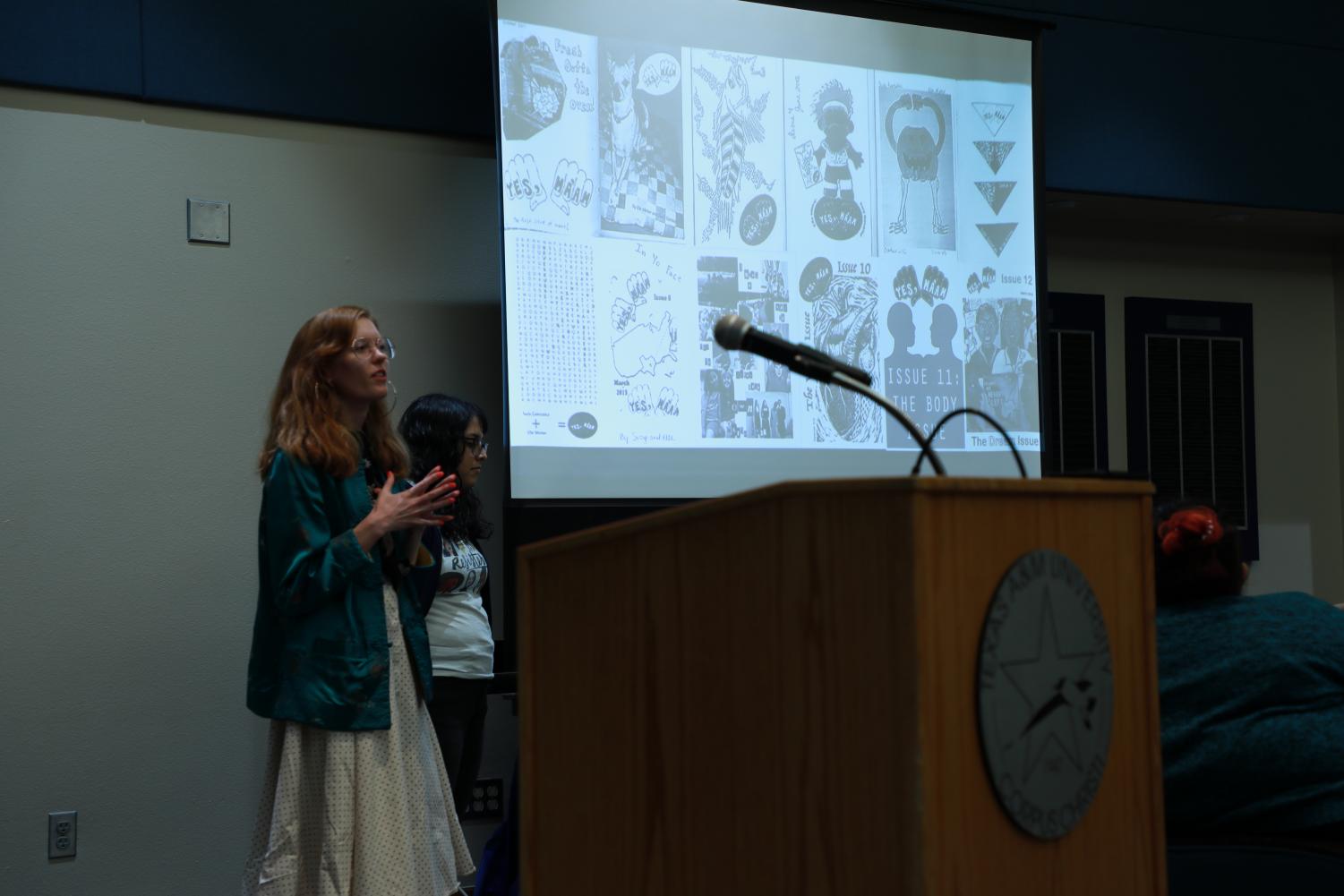 Elle Minter (left) and Suzy González (right) with “Yes Ma’am” begin the panel discussion, talking about their inspiration to find a feminist zine that features everything from poetry, to comics, to recipes.

“Zines are just self-published materials,” said Hernandez. “So, self-published materials have historically been used by oppressed populations to empower themselves, to show themselves, to be proud of themselves, but then also to disseminate information amongst people. In the 90s, there was a big feminist zine movement that actually changed the course of feminism because it was bands that were all women, traveling around the county, and they were selling feminist materials. This was before the internet, so a lot of women around the country that were in rural areas, not necessarily big cities, had no access to feminist materials. 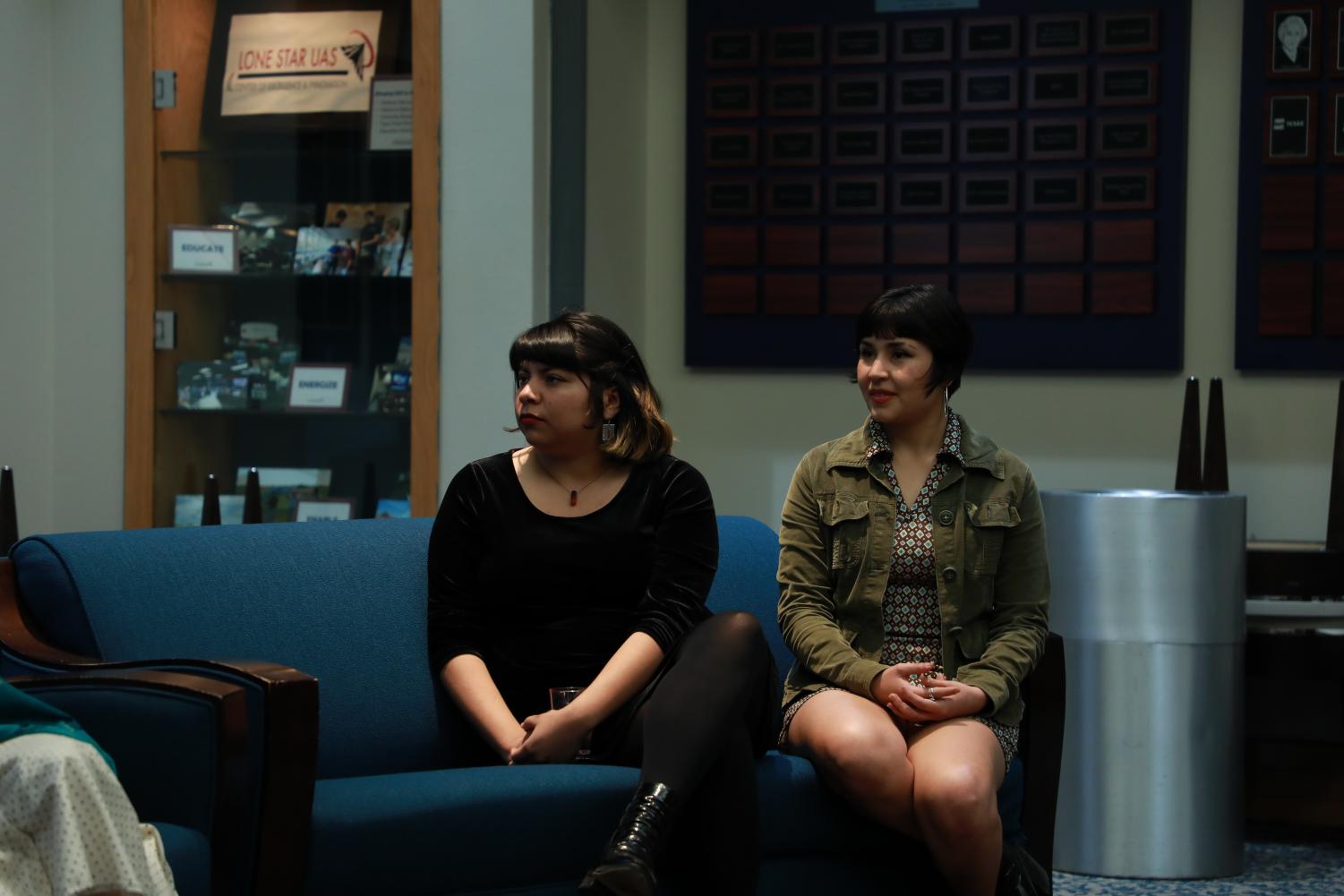 Claudia Delfina Cardona (left) and Laura Valdez (right) with “Chifladxzine” began their zine because they felt underrepresented and wanted to give a voice to those that felt the same, specifically featuring creative works of Latinxs.

“So, I feel like we are a part of a continuation of that tradition, of the only way materials and media can be feminist is if women are in charge of the publishing,” continued Hernandez, “if they are in charge of the writing, if they have control of the narratives that are being presented. We’re the editors, we’re the publishers, we’re the authority on what gets published. That is extremely rare in media. Most media is controlled by men and most media is not controlled by people of color. So, this is a continuation of a feminist movement that’s been happening since paper was first existing.” 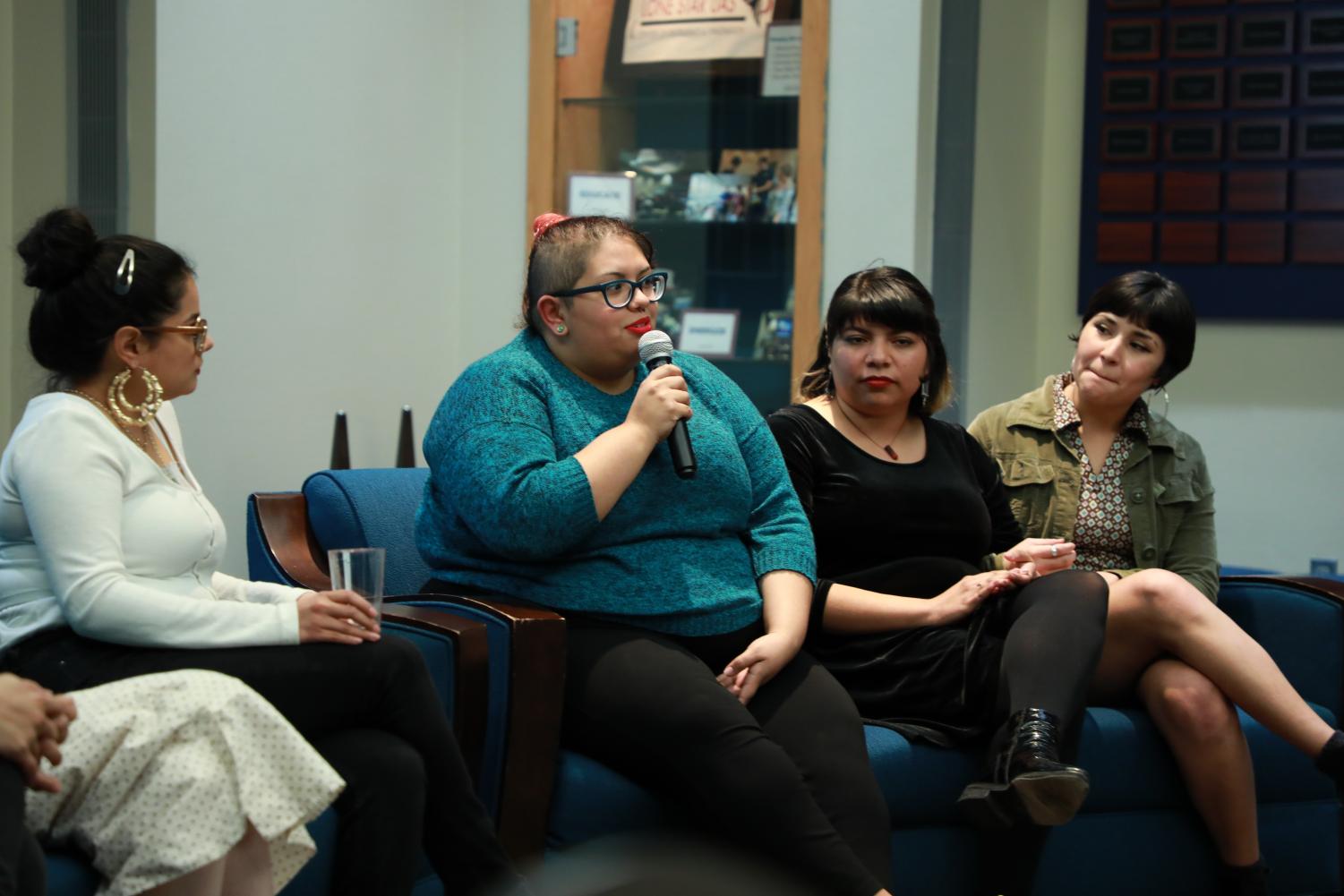 Isabella Ann Castro (speaking) and Natasha Hernandez (left) with “St. Sucia” wanted to create a space for women, specifically Latinas, to have a voice and outlet that was honest and empowering.

St. Sucia and Chifladxzine both specifically spoke about how their zines catered to Latinx culture. Castro created her zine as a creative outlet after getting out of a bad relationship and wanted to create a space of honesty.

“I just wanted a space for brown women to talk sh– … and be very honest,” said Castro. “I think there are a lot of taboo topics within the Latino community and we’re just kind of shunned. … And this is the space for those conversations that we normally internalize and keep to ourselves. So, it’s just kind of trying to create a space for honesty about experiences and even being really sex positive because that’s a really big thing that’s not in Latino community or it’s construed as stereotype …” 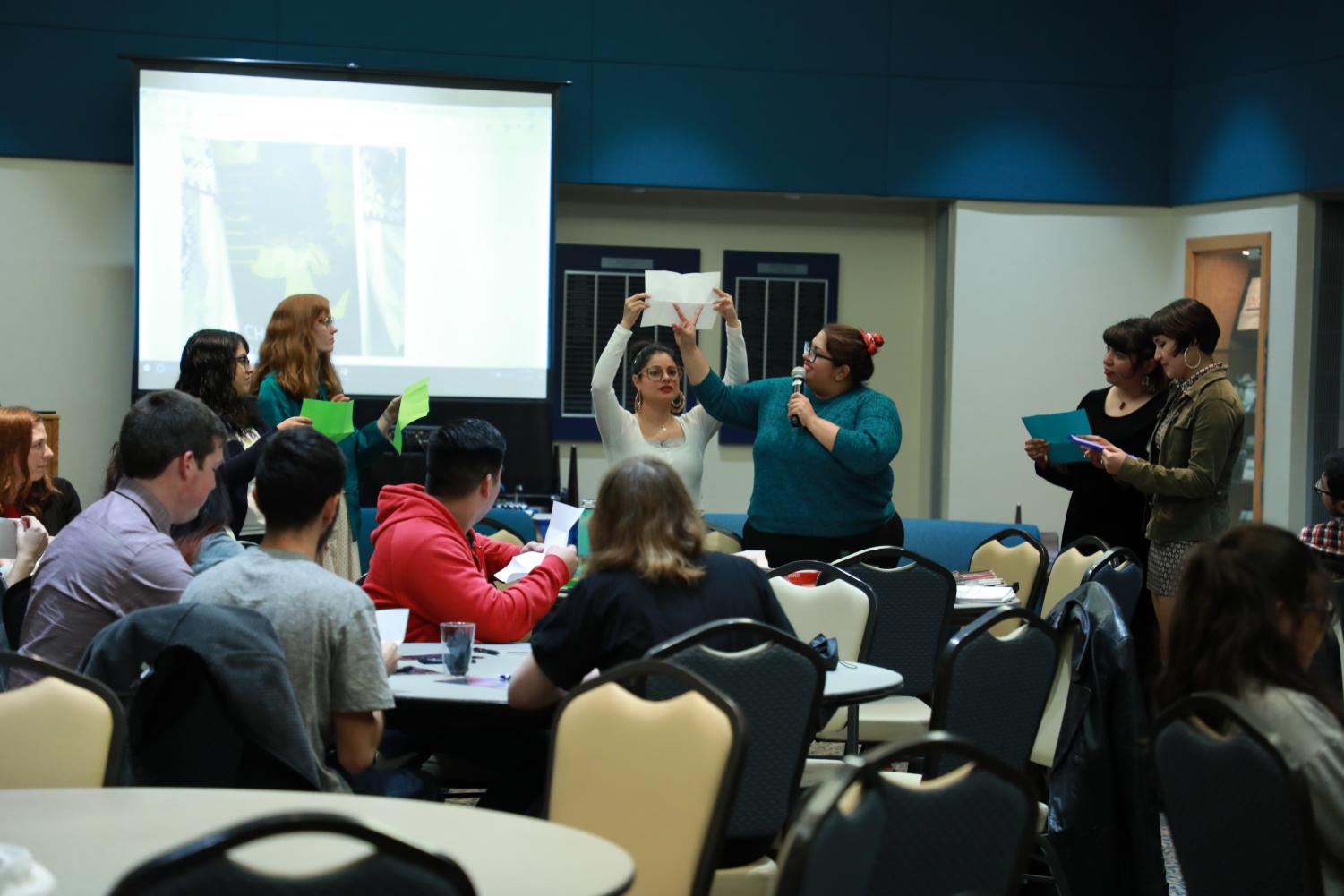 All of the zine creators led the attendees through a step-by-step process of how to make their own zines, also giving prompts for individuals to fill their spreads.

After the conclusion of the panel discussions, the attendees were led through a workshop on how to create a zine on the go out of a single sheet on letter paper, and then how to make a bound zine. 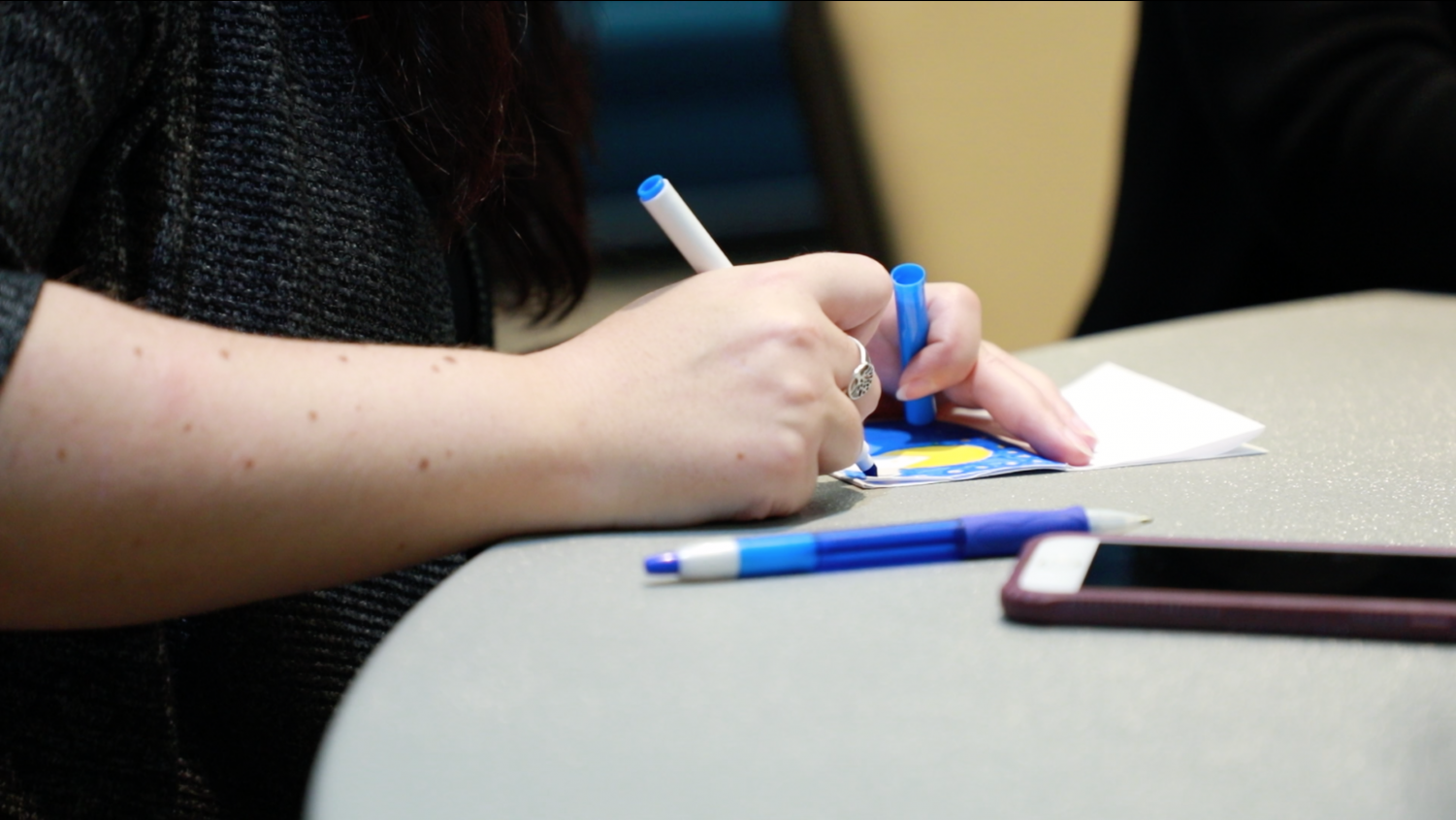 There were many materials available for students and faculty to customize their zines.

All of the zine creators hope to possibly inspire students to start a zine at TAMU-CC. They believe zines are a great way to spread your voice and take a stand for underrepresented people or ideas.