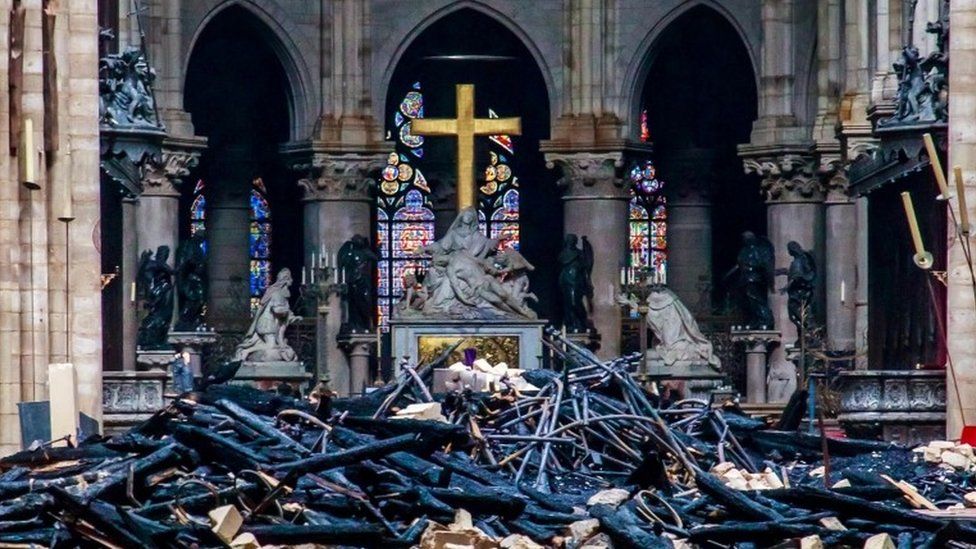 Photography courtesy of BBC News, The remnants of damage shown inside Notre Dame

Photography courtesy of BBC News, The remnants of damage shown inside Notre Dame

On April 15, 2019, an accidental fire by reconstructionists burned across the Notre Dame Cathedral. Millions of people all over the world reached out with their grief, condolences and assistance. Now, while this is a beautiful show of the world’s solidarity and ability to come together to protect a historical monument and piece of art, I think it’s a shame that government and other billionaires can’t cohesively come together to solve a lot of our world’s pressing issues.

According to France24, a European news source based in Paris, European billionaires were able to amass €850 million (over $900 million in U.S. currency) alone. Here in the U.S., Tim Cook, Hillary Clinton, Disney and the government either donated or promoted donating to the cathedral, bringing the total to over $1 billion in less than a week.

It is said that while the fire caused damage, many pieces and artworks were protected and already out of harm’s way because the cathedral was in the process of being rebuilt. So fortunately, the damage done is not as heavily unrecoverable as people feared. However, on social media alone, you can see how billionaires and politicians in Europe and the U.S. are treating this as a publicity race rather than giving donations out of necessity.

This behavior has spurred controversy both in Europe and in the Americas. When Trump and the White House offered to assist and donate to the church, I couldn’t help but think of Puerto Rico, Flint or all the other black churches and mosques burned downed by U.S. terrorists. I couldn’t help but think of our current pressing concerns like climate change, financial debt, appropriate working wages, and more. People are always asking, “Where are we going to get the money from to make these changes?” Yet, somehow, we always have money to preserve or create new monuments.

Now, I don’t see anything wrong with preserving or protecting monuments, especially the Notre Dame. It’s an irreplaceable testament to centuries of art and culture, but the fact remains that the Notre Dame is not the only important historical and religious monument.

It’s not even known where the unused money in the recovery efforts will go in the coming years, and that’s something I don’t think many are considering. I question why America, a country who has become so insistent on caring for their own people first and foremost, will reach out to provide foreign aid for a landmark that is very much protected and recoverable by its own country, but not extend that help to people who are already here or want to come here.

Ultimately, I have mixed feelings. When the fire was happening, I was heartbroken. When people were becoming angry and pessimistic about the possibility of recovery, I was frustrated. When I heard the Notre Dame could be and would be recovered, I was elated. However, now that I’m seeing this race to see who can donate the most to the church, and I know how money — and the lack of it — seems to be the excuse for anyone against progressive changes to the world’s issues, I am sorely disappointed to see where everyone’s priorities lie.

If you’re interested in donating to recovery efforts of areas that desperately need help, click the links below:

Light the Lamps of Masjid Al-Aqsa