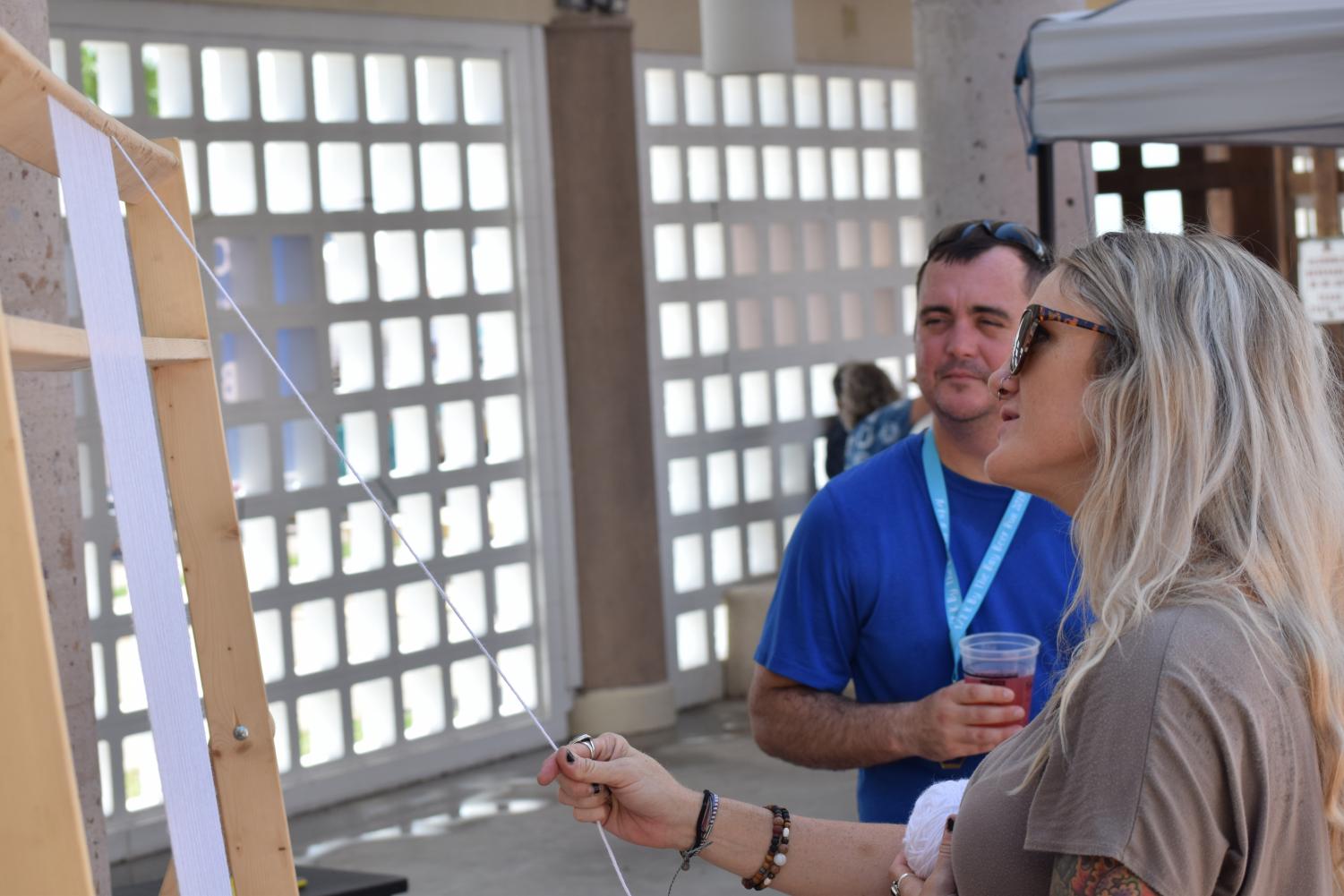 Jalyn Casarez talks with a festival goer as she works on a fabric art piece at the Arts Alive Festival. ( [Raul Alonzo Jr./ISLAND WAVES])

Jalyn Casarez talks with a festival goer as she works on a fabric art piece at the Arts Alive Festival.

Attendees see and learn about creative process at Arts Alive

For two days, the world of art across multiple mediums was on full display as the fourth installment of Arts Alive Festival that kicked off Labor Day weekend.

The event was held downtown at the Art Center of Corpus Christi and featured vendors, live music, a beer garden and a .5K race by the bay. But it was the live art demonstrations that emphasized what Art Center Executive Director Dianna Bluntzer called the mission of the festival.

“The festival concept and purpose is to bring together artists and the community,” Bluntzer said. “People will come to the gallery and want to buy art but not know the process. This weekend is all about how art is made. So, you can actually see what’s involved.”

Jalyn Casarez, a fiber artist operating her business under the named MoonLight Woven, said the live demonstration aspect has helped inspire community members to try their hand at creating art. When Casarez set up her large loom the previous year and began spinning yarn to create pieces, curious onlookers of various ages stopped by to give it a try. Eventually, they produced a long, table-runner-like piece that Casarez described as a “community weave.”

“A lot of the time, they don’t even know what it (the loom) is,” said Casarez, “and they’ll come over. And a lot of them are hesitant to do something, but once they start doing it, a lot of them don’t want to leave.”

One ongoing display during the festival was put on by Siete Printmakers, a group of seven printmakers brought together by Ben Munoz, an artist formerly based in Corpus who now works in Dallas. The printmakers were set up inside the large Meadows Gallery of the center where they demonstrated silk screen and relief printing.

It was the on-the-hour printing of large pieces utilizing a steamroller that brought in crowds curious to see the artists at work.

“They usually don’t know what’s going on until we pull the print up,” Munoz said. “They’re like, ‘What are they doing? Why are they driving a steamroller?’

“Printmaking is a weird thing. It doesn’t get a lot of exposure as it should, so a lot of times people will look at it and still won’t understand. They’ll be like, ‘Oh, it was a stamp.’ But it’s wood that we carved and made all the imagery. So, the reception is pretty like, ‘Oh, wow!’ I mean, you run heavy machinery over something, people are going to be excited about it.”

Full Court Press, a student printmaking group from TAMU-CC, also set up and provided live demonstrations of T-shirt printing at the festival’s interest. For adjunct professor Cassie White, the event was a great way for artists to reach the wider community.

“I think it’s wonderful to get people from all different areas of the arts in Corpus Christi together in one place,” White said.

TAMU-CC presence also made itself felt with a sneak performance by the Island Dance Company of a piece from the upcoming Bailando Festival in October.

Outside of the demonstrations, several craft tables were set up for festival goers of all ages to try their hand at creating. For Ashley Garza, who was attending the festival for the first time, the event was a great way to expose the wider community to the local art scene.

“I think it’s pretty awesome,” Garza said. “I like that there’s a lot of local vendors here. Puts them out. Puts the word out to support more local artists.”