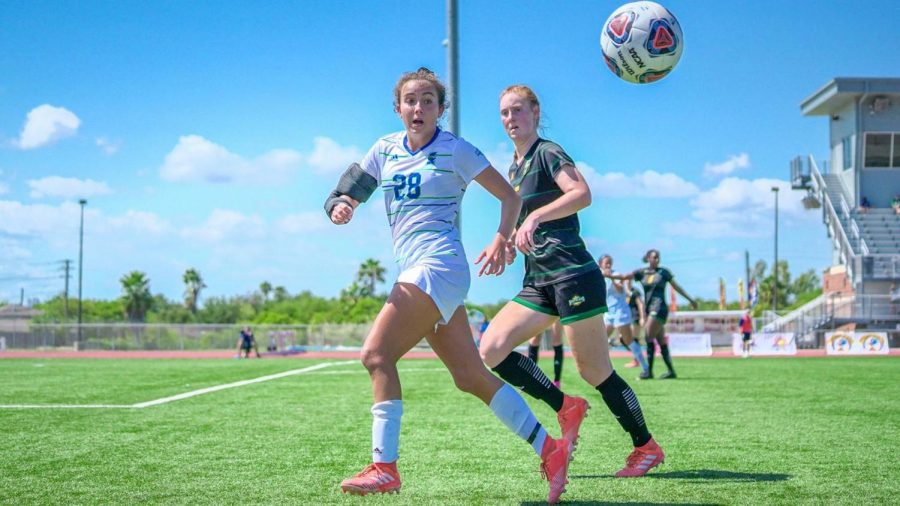 Photo courtesy of Islander Athletics - Freshman Ana Recarte-Pacheco attempting to chase down a pass against Southeastern Louisiana on Oct. 6th. Recarte-Pacheco finished the day with a crucial goal during the first half of play.

On Sunday, Oct. 6, the TAMU-CC Women’s Soccer team took down conference opponent, Southeastern Louisiana, in a 2-0 home win for the lady Islanders. Sunday marked the lady Islanders tying the program record for wins in a single season with six, as the set previous record a few seasons ago. Texas A&M-Corpus Christi move to 6-5-1 and 3-1-1 in conference action, while Southeastern falls to 2-9-1 and 1-4 in the Southland Conference. TAMU-CC remains unbeaten in its last four matches against conference opponents.

The Islanders came into the match plagued by injuries but bounced their way back into a conference threat after defeating a tough Southeastern Louisiana team.

“We just really came together. … It’s a squad game and were showing that right now with the amount of injuries that have occurred. We’re playing some great soccer and grinding out some results,” said head coach Craig Shaw.

The match started off fair with each team exchanging blows after possession changes. Freshman Ana Recarte-Pacheco erupted right before the half, as she drilled a shot in the 41st minute with an assist by Abby Deakin to give the Islanders a 1-0 lead. Soccer star Abby Deakin buried a game clinching shot in the 82nd minute, as she contributed heavily to the lady Islanders success. The junior currently leads the team with six goals and three assists on the season. Head coach Craig Shaw praised Deakin when interviewed by Islander Athletics.

“The whole midfield was playing really well throughout the game, Abby Deakin right now is just on fire. … Her work rate is phenomenal, her touches are great, and she just has such a desire of scoring. She’s playing the best soccer I’ve ever seen her play and I’m really happy for her,” said Shaw.

Overall, Texas A&M University-Corpus Christi recorded 11 total shots with eight on goal compared to the Lady Lions’ nine with five coming on goal. Dana Curtis led the team with three total shots and two on goal. Madeleine Lozano and Emma Gibbs each recorded two shots apiece with all being on goal. The Islanders pitched yet another shutout with junior Kyleigh Hall in goal, along with defenders Shayla Spearman, Maddie Janolo, Megan Dodd, Alana Mangan and Jaedyn Johnson. Hall recorded four total saves in 90 minutes of action, earning her sixth shutout of the year.

The lady Islanders will take on conference rival, Abilene Christian next on Oct. 11 at 7:00 p.m. at the Dugan Soccer and Track & Field Stadium. For more information regarding TAMU-CC Women’s Soccer check out Islander Athletics where they provide updates, scores, and scheduling.