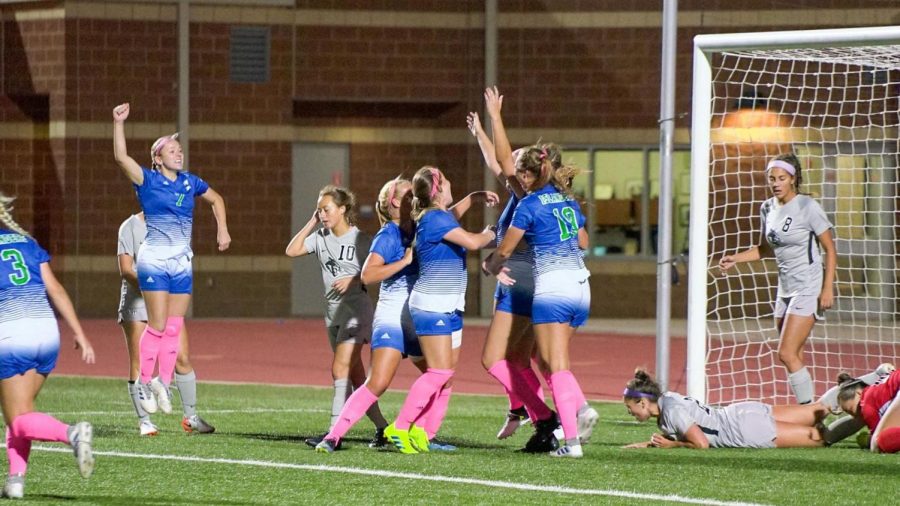 Photo courtesy of Islander Athletics - TAMU-CC women's soccer team celebrates after goal from junior Kayla Gove, sealing the upset for the lady Islanders in a 2-1 victory.

On Friday, Oct. 11, TAMU-CC women’s soccer took down former conference leader, Abilene Christian, in a 2-1 thrilling win at the Dr. Jack Dugan Soccer and Track & Field Stadium. Friday’s win marked the Islanders setting a new program record for most wins in a single season with seven so far on the year, the previous record was set in 2017 with six. The lady Islanders have also tied their longest winning streak in program history with three-straight victories over conference opponents.

The lady Islanders remain undefeated in their last five matches and completes their home stand with a perfect 3-0 record. Texas A&M-Corpus Christi moves to 7-5-1 and 4-1-1 in conference action, while ACU falls to 8-3-2 and 4-1-1 in the Southland.

“That’s the thing that makes this year’s team so good, we have the fight and that’s what we’ve been missing over the past few years. …I cannot be more proud of the way we did not give up, especially these conditions,” said head coach Craig Shaw when interviewed by Islander Athletics.

Juniors Addison Urbanus and Kayla Gove sealed the upset victory for the team, as both midfielders scored in Friday’s match. Urbanus scored the first goal of the match for the Islanders in the 22nd minute with the assist coming from freshman newcomer, Emma Gibbs. Gove added the game winner in the 86th minute of play while unassisted.

In her seventh win as the Islander’s goalkeeper, Kyleigh Hall recorded five saves through 90 minutes played. Hall continues to dominate in cage and will be tested against an aggressive Northwestern State team in the next coming week. Her remarkable play is truly setting herself apart from past lady Islander goaltenders, as she now holds the record for single season wins by a goalkeeper.

The Islanders are back on the road as they are set to take on Northwestern State University on Friday, Oct. 18 at 7 p.m. in Natchitoches, La.