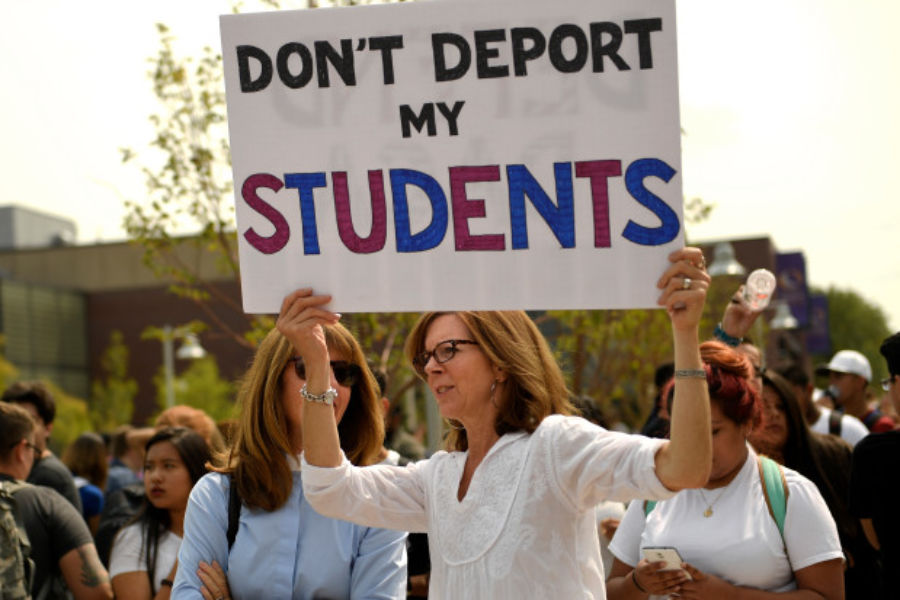 Photo courtesy of Joe Amon/The Denver Post – Randi Smith, a psychology teacher at Metro carries a sign for her students as students, immigrants and Impacted individuals marched to Tivoli Quad on Auraria Campus to defend the Deferred Action for Childhood Arrivals (DACA) program during a city wide walkout and rally at Auraria Campus downtown Denver, CO.

Roughly 800,000 of immigrant youths who fell beneath the government protection under the Deferred Action for Childhood Arrivals, or DACA, remain in limbo and are faced with uncertainty, including students who attend TAMU-CC and other institutions of higher learning in Texas.

This is after the Department of Homeland Security announced that it would repeal Obama’s DACA program last summer. Explaining that no new applications would be accepted. It is “in the best interests of our country,” says President Donald Trump in a statement release explaining the “wind-down of DACA.”

The Supreme Court then decided to review the case. But, the final decision on whether to keep or remove DACA is to take place no later than June 2020, according to the National Immigration Law Center.

Recently, Island Waves spoke by phone to a DACA recipient who wished to remain anonymous in light of the current political atmosphere. While this student does not attend TAMU-CC, they are enrolled in college in South Texas.

“If DACA were to be (officially) revoked, then I would feel useless and would not be able to go to school, drive legally, or even have a job to pay the bills,” said the DACA recipient. “I do fear deportation because I know it will be worse in my country. I will not have the same opportunities I have here and not as good, so it would make it more difficult and stressful to live.”

Essentially, DACA strives to protect immigrant youth by giving them a chance to live in the United States without fear of family separation, protection from deportation and allows for the opportunity to go to school or work during the two- year period. The recipients are then able to apply for renewal every two years.

The pro-immigration policy was created under former President Barack Obama.

Jens Manuel Krogstad, an expert in global migration and demography, explained that, “Since 2012, about 800,000 such renewals have been issued. Requests for renewals have increased significantly each quarter since spring 2016 — from about 16,000.”

“(DACA) makes me feel safer in this country,” said the DACA recipient, “and gives me the opportunity to do more and be able to have a vision for success, and educate myself past high school.”

“… It also gave me the opportunity to get my driver’s license and other things that require social security.”

The power to make the final ruling falls in the hands of the Supreme Court. However, President Donald Trump has encouraged Congress to come up with a different solution, an alternative in the case that DACA were to be fully revoked.

“I would like them (The Supreme Court/Congress) to keep in mind all the dreamers that go to school,” said the DACA recipient, “and the ones that work hard because they have this opportunity to be able to do that in this country, which most of the (United States) citizens don’t even take their opportunities as serious as DACA recipients do.”

Upon the Trump administration’s decision to end new application for DACA, educators, politicians and students drew to the streets in protests. One educator Island Waves spoke with witnessed the repercussions in schools first hand.

Dr. Elizabeth Holbrook, a retired high school counselor with over twenty years of public-school experience and whose dissertation focused on DACA students, wrote in an email, “I conducted counseling groups comprised of students with DACA/undocumented status. Prior to the 2016 election, we were pretty open in the group about status and the challenges associated with it. Conversation was open, free, supportive.”

“When the results of the election were revealed,” she continued, “I felt certain it was too dangerous to conduct this group. The day after the election, I was out off campus. When I returned the next day … students had turned in signed permission slips to be part of a counseling group for students with undocumented status. I realized at that point, now, more than ever, these students need support from the educational community. So, for all the fear that this administration has tried to create, the faith sustained by those with a clear conscience is difficult

While DACA recipients come from every race, and ethnicity, a large portion does tend to be of Hispanic origin.

TAMU-CC being a Hispanic driven institute does provide resources for those under DACA. If you are facing immigration issues and need to speak to someone, I-Care, the office of International Education or the office of the Associate Dean of Students can provide with assistance.

If you need legal immigration services, RACIES is a non-profit organization that helps provide free to low cost assistance. They are located at 403 Waco St, Corpus Christi, TX 78412 and can be reached at (361) 693-5838.

If you are currently under DACA, and your DACA is set to expire within the next nine months, consider renewing ASAP. If your DACA has expired, or was terminated, consider reapplying ASAP. Because DACA is in recession, and under Supreme Court review, if you never had DACA before then you are currently not able to apply as of now. This could be subject to change. — The Immigrant Legal Resource Center