TAMU-CC students still catching them all 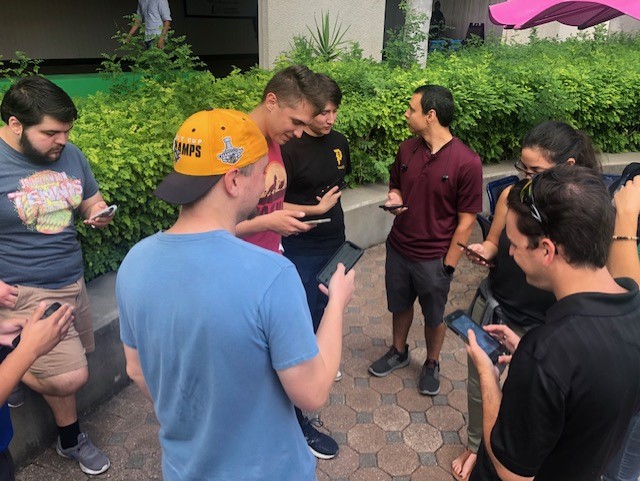 Gabriella Ruiz/ISLAND WAVES - Students are on their phones as they hunt for Pokémon nearby.

If you happen to see a group of students huddled up on campus, intensely staring at their phones or a device worn like a watch, it may be they are getting caught up in a new wave of the app game called Pokémon GO

One reason is because more Pokémon are popping up around campus, another reason is yet another app.

Earlier, Pokémon weren’t showing up on campus until a player reached out to Niantic, Inc. The technology company that created the Pokémon GO app resolved the problem by having more Pokémon appear around campus. As more TAMU-CC students started hunting Pokémon, they decided to create a group chat on an app called Discord. Discord is a server that allows students to interact with other gamers as they play in areas around Flour Bluff, Calallen, Port Aransas and here at TAMU-CC. By using this server, students communicate, battle with each other and announce the Pokémon they have caught.

The group welcomes all new players joining even if they have very little experience with the app.

Senior Daniel Benavides genuinely enjoys the game as he grew up as a child watching the TV show and having it on his Gameboy. When the Pokémon GO app was released in 2016, he was very excited to download the game.

Benavides has goals that motivate him to achieve his journey in catching many exciting Pokémon along the way. This game impacted Benavides’s life by allowing him to stay physically active in burning calories as he is out having fun while catching Pokémon, in which he hopes to play as long as the game is live.

“Current goals I’m working on are getting every Pokémon with a lucky stats,” said Benavides, “which means it has a strong individual value stats, otherwise known by the community as IVs.

“It helps that this game has a reward system that rewards you on how many kilometers you walk per week, and me being as dedicated to the game as I am, I always make sure I surpass the 50-kilometer reward mark every week.”

Benavides believes that people are starting to play more due to a new release of the generation 5 Pokémon.

PhD candidate in Coastal and Marine System Science Ben Johnston believes that Pokémon GO is absolutely thriving on campus now more than ever.

“I’ve always enjoyed Pokémon since I was a kid,” said Johnston, “but I especially like this game because of the social aspect. Most of my friends play it on campus, so it’s fun to walk around, get a bit of exercise, explore the city and spend time with friends.