University responds to the pass/fail petition 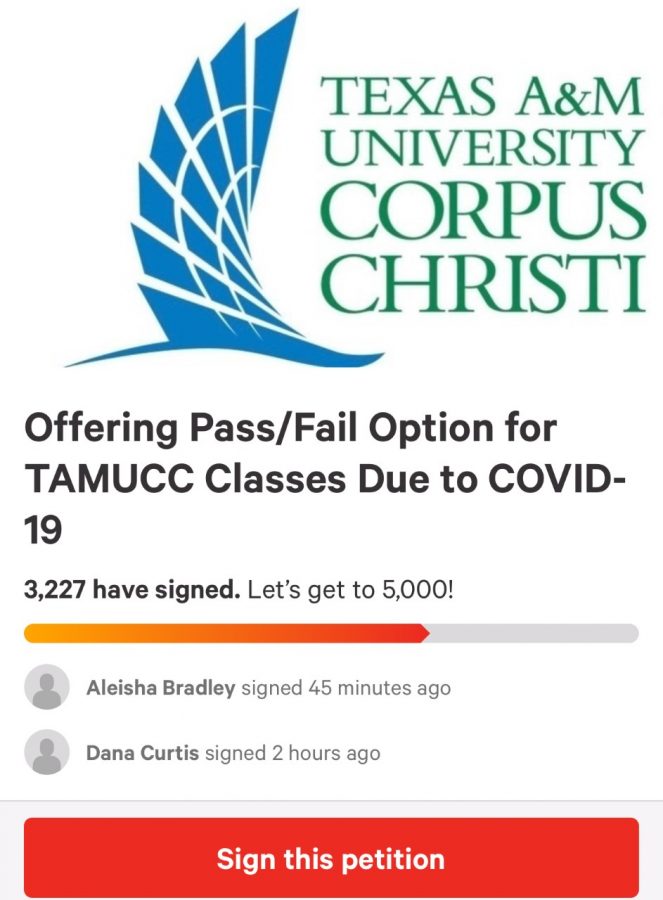 Blake Naylor’s petition to push for a pass/fail grading system reaches over 3,000 signatures.

Blake Naylor, a freshman studying Biomedical Sciences at TAMU-CC, created a petition to advocate making the ‘pass/fail option’ available to students at the university. On March 26, Clarenda Phillips, the provost and vice president for Academic Affairs, responded to the situation via email by explaining that switching to pass/fail could jeopardize the future of many students who require letter grades for programs, scholarships and other benefits.

“Now that I don’t see them (professors), I fear that my GPA is going to be greatly impacted,” said Naylor. “I have also been dealing with the stress of family members being infected with the coronavirus, and by the process of moving. Academics is just another stress I don’t really need at the moment.

“Many of my friends have complained about this transition and of all the different situations that they think pass/fail could benefit them. I decided to step up and try to make a change.”

Naylor stated in his petition that he wants the administration to push for an optional pass/fail, leaving the student to make the ultimate decision as to whether they want to apply the pass/fail option to their classes. He also explained that many of these face-to-face classes are not structured to be online, and as mentioned in his petition, struggling to balance classes during this COVID-19 pandemic can take a toll on a student’s mental, emotional and physical health.

“It would be unfair for these set of circumstances (outside factors due to COVID-19) to risk the GPAs of our students and their future endeavors with graduate schools and careers,” said Naylor in the petition. “It is more favorable for an admissions board or employer to see a ‘P’ on a student’s transcript than a grade that is well below their normal GPA.”

In the email response, Phillips gave nine reasons as to how the pass/fail could hurt some students. Among those reasons were, “Students that want to transfer to other institutions (e.g., PSA) will not have their courses accepted or a calculated GPA to bolster their application,” and, “Students on academic probation would not receive grades to improve their standing.”

“Many of our academic programs are accredited,” Phillips continued, “and their accreditation and student certification requirements may stipulate that a grade of C or above is required, while a Pass/No Pass system would allow a D as a passing grade. Making this switch without thoughtful consideration could jeopardize the distinction and prestige we gain from accreditation or delay students in earning their certification.”

However, Naylor believes the university might have confused his original ideas.

“They were considering the pass/fail option to be university wide and not an option for each individual student, which is what my petition is going for.”

Since the start of Naylor’s petition, there have been mixed reviews from students via social media. Lilibeth Salazar, a senior at TAMU-CC, said “Personally, I do not think it’s best to use this specific method because… .academic honors are important to me. If I would get my master’s degree in the future, then it is risking the courses not being accepted. I receive financial aid, so it can negatively affect that as well.”

If TAMU-CC switched to the pass/fail grading system, they wouldn’t be the first. Due to COVID-19, schools like Texas A&M University-College Station, Harvard and other universities across the nation have switched to pass/fail, sometimes referred to satisfactory/unsatisfactory grading. As for now, Philips says that the administration will send an update this Wednesday, April 1.