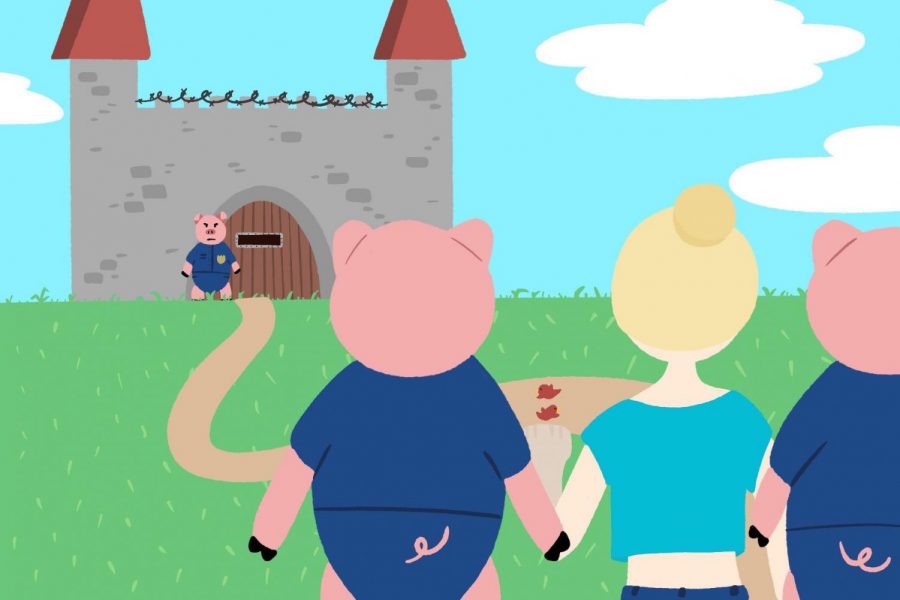 Land, FAR FAR AWAY — Cindergirl was brought to jail by police early this morning for the murder of Prince Charming several months ago. Her stepmother has been released and was seen standing smugly in front of the courthouse.

Prince Charming’s body was found around midnight during his birthday ball. His hands were brought together in what investigators assumed to be prayer. The corner ruled cause of death was a broken heart due to a literal glass dagger that cleaved it in half.

The Chief of Police snorted wildly during a press conference the following morning.

“My siblings and I will find justice for the young prince,” said the translator as the chief slammed his hooves against the podium. “The grip of the dagger is fitted, and we are determined to put this dagger in the hand of every attendee of the ball last night to see who it matches.”

A month went by until a match was finally found in the hand of a stepmother that no one knows the name of. She has been twice widowed, the second time leaving a young girl by the name of Cindergirl in her care. Cindergirl and her step-sisters were photographed sobbing in the doorway of their surprisingly nice house as police took the stepmother downtown.

“There’s no way she could have possibly done this,” said one of her daughters, dabbing delicately at her eye as she spoke. “She greatly admired Prince Charming’s power — I mean prowess in polo. She always said he looked so regal with a popped collar.”

It seemed the case was closed for further investigation until an anonymous tip came in accusing Cindergirl of committing the crime. She was brought in for questioning but was shortly let go after Insta stories placed her downtown at Sugar, Spice, and other Drugs. It seemed the tip led to nowhere until one brave servant stepped forward.

“Squeak,” he told us, looking sadly down into his tiny, tiny paws. He and many other servants in the household were forcibly transformed into animals to help assist Cinderella with her murder plot. The mouse-man shivered as he recalled her running back to the pastel blue VW Bug after the ball, blood running down her hands. She threatened to feed him and the others to the family cat if they came forward.

The creatures were transformed by non-other than Fairy Goddaughter. She was brought in for questioning and confessed when investigators refused to give her a reusable straw to drink out of.

“Sksksksksksk,” said Fairy Goddaughter told investigators. “It was the biggest oop of my life. I helped her (Cinderella) because she said it was the only way to get away from her stepmother so we could finally be together.

“I was ready to take our relationship to the next level. I already picked out matching scrunchies and everything.”

Fairy Goddaughter is also currently in jail with a bond set to 100,000 pairs of magical jorts.

Tiniest-of-squeaks man and the other servants have banded together to create Teams Helping Indignant Servants Stuck Under Crazy, Knuckleheaded Spells (THISSUCKS) to assist other servants who have fallen victim to egregious spells. You can click here if actually considered donating.

Stay tuned to other news organizations as we fail to continue reporting on the situation.