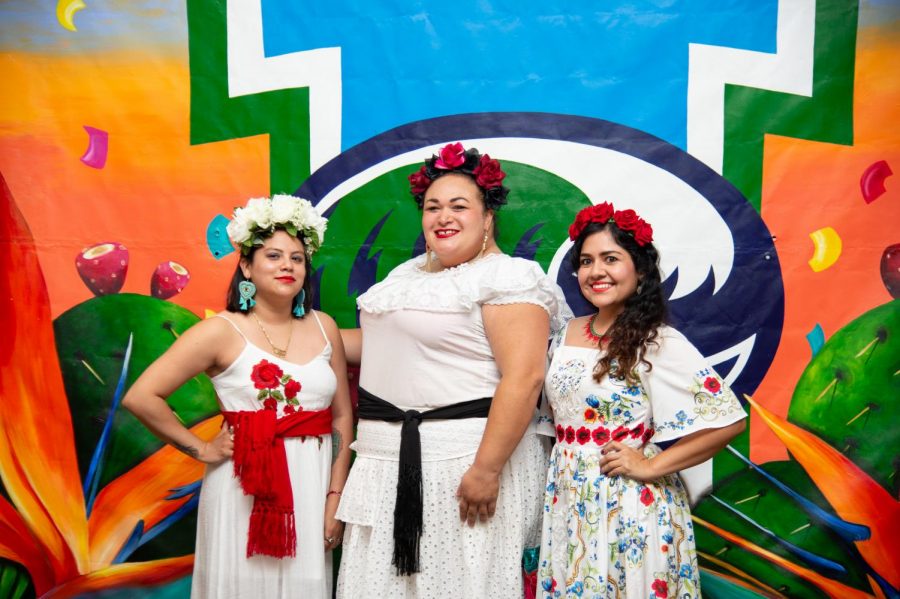 Courtesy of TAMU-CC Marketing and Communication

From left to right, Mayra Zamora, Monica Marie Garcia and Sandra Gonzalez, known collectively as Las Muralistas, pose in front of their mural “Viva TAMU-CC” during the piece’s unveiling on Sept. 27, 2019.

TAMU-CC campus may be closed to promote social distancing, but that hasn’t stopped one of its artistic fixtures from receiving area-wide recognition.

The university’s “Viva TAMU-CC” mural, created by the art trio known as Las Muralistas and found in the University Center, has advanced to the final voting round in the “Mural” category of The Bend Magazine’s 2020 Local’s List.

The list, which highlights local businesses and achievements, opened up nominations to the general public and readers in over 100 different categories on March 2. The top five in each category to receive nominations advanced to the voting round which lasts from April 6 to 27, with winners announced on July 1.

For Marie Garcia, the designation was much welcomed.

“It’s very exciting to know that everyone is truly enjoying our mural,” Marie Garcia said. “It was awesome to be nominated and then to find out we made the top five, was pretty awesome.”

According to Marie Garcia, the mural is an homage to the university and was inspired by both Hispanic culture, as well as several aspects from the TAMU-CC campus.

“It was inspired by our Hispanic culture, the Islander Mariachi sombrero, the beautiful sunsets and lovely bird of paradise flowers that you see at the university, and the Islander spirit,” Marie Garcia said. “We all collaborated on the idea, and there’s a bit of all of our styles of painting in it.”

According to Zamora, the three met while students in the university’s art department where they became fast friends and began collaborating on projects. Initially calling themselves Las Pintoras, the artists participated on individual levels with the university’s Hispanic Heritage Month celebrations since 2017.

It wasn’t until the idea was raised for a mural to be erected as part of the 2019 celebrations that Zamora pitched the three artists collaborate to carry out the project.

“That’s when we came together and officially named ourselves Las Muralistas,” Zamora said. “I knew this mural would be amazing because it was created by TAMU-CC alumni, but most importantly, created by three strong Chicana women. This is only the beginning for us!”

Those who win in their categories are published in the July issue of The Bend Magazine and honored at a party set for July 30. Voting takes place online at thebendmag.com.

For Zamora, the designation would help bring both a sense of validation for their work, but also provide the honor of being highlighted alongside one another.

“It will feel almost like validation of our work,” Zamora said. “We do so much for the community individually, but to be able to win with my art sisters would be such a great honor. We love our university and are amazed by the continuous support. We are blessed to represent the College of Liberal Arts.”