Evolution: The Other Side 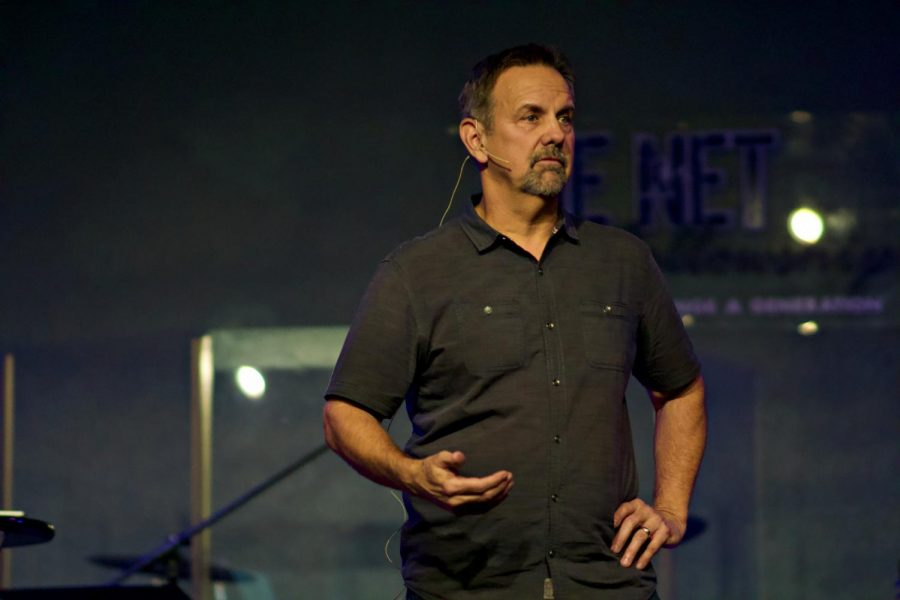 Glenn Holland, Lead Pastor, and founder, of The Net

Evolution is, to most of us, a tale as old as time. Wedged into middle school curriculum, most kids learn the brass tacks of how humans came to be at an extremely unripe age. But what if we were told a wrong story? The Net Fellowship, a non-denominational church associated with the Assemblies of God, challenges the current theory of evolution. The church, which resonates with Pentecostal ideology, is producing a six-part series that rebukes Darwinist beliefs of adaptation, instead suggesting a creationist dogma. I visited the inauguration of Evolution: Have You Heard The Other Side? on Oct. 2 to gain insight as to the fellowship’s stance.

Before we can dive into any new theories of evolution, we first must take a second look at the principles we’ve been taught. Here’s the current hypothesis on how we came to be, according to pretty much everyone in the biological sector.

Evolution itself, according to the Stanford Encyclopedia of Philosophy, is defined as “Change in the properties of groups of organisms over the course of generations…” In essence, all living creatures will begin to accumulate changes in their DNA, agonizingly slow and throughout multiple  generations. Some of these changes are beneficial to the species, such as a giraffe’s neck slowly growing taller to allow better access to delicious acacia leaves. Some traits, such as the red hair and freckles combo in humans, do not affect the species’ ability to survive in a positive or negative way, and simply float through generations idly. Others still, such as Crohn’s Disease, are harmful to the host animal, but due to their non-fatal nature continue to be passed down.

A crucial portion of Darwinist evolution is natural selection, a theory that explains why we have certain traits. Natural Selection posits that only those with favorable traits are allowed to pass on their genetic codes by way of offspring. Only the giraffe with a tall enough neck will survive and have offspring. Those unfortunate enough to have too short necks will starve long before they have the opportunity to mate.

If the theory of evolution through natural selection can explain why we are the way we are, can it also explain our origin? To the best of our knowledge, all life on earth evolved from a tiny amoeba many millennia ago. Though no one knows how life on earth began, the latest research has traced the common ancestor of all existence to a microscopic microbe that resided on hydrothermal vents, forever cloaked in the twilight of deep sea. The current theory for life on Earth is that this little guy, through billions of years of evolution and natural selection, eventually became every plant, animal and prokaryotic creature on Earth, humans included.

I sat down with Glenn Holland, lead pastor and founder of The Net, as well as the main speaker for the evening. Holland, known affectionately by his church as Pastor Glenn, has been serving in the church for 30 years. Curiously, ministry was not his first choice of career; Holland graduated with a Bachelor’s in Geology before pursuing theological and seminary courses. It’s this degree, he stated, that qualifies him to speak about the details of evolution theory. “I think initially when I went to college, I was conflicted,” he stated while talking about his personal journey to creationism. Beginning his college career as a Christian, Holland mentioned the tension he saw in his religious classmates. “If you’re not going to deny your faith, you try to merge science as it’s presented to you with your faith… people don’t want to commit intellectual suicide,” commented Holland. Through rigorous study and conversation with professors, Holland emerged a creationist, and is now putting both his faith and his scientific know-how to use. The service consisted of music, prayer, an hour and a half long presentation from Holland and a benediction to wrap everything up.

Saying that the folks down at The Net Fellowship are anti-evolution would be partially correct but it is also somewhat of a misnomer. Holland is creationist, specifically a scientific creationist. This means, putting it simplistically, that he believes in some aspects of evolution theory, but not all of them. During his presentation, Holland emphasized the difference between micro and macro evolution, and specified which thesis supported his perspective. Both theories are supported by current scientific belief and are important facets of the overarching evolution theory, however Holland claims that only one is correct.

Microevolution is the belief that any organism, when placed in an environment, will evolve throughout its lifetime. This applies specifically to changes made within a certain species and typically takes place within shorter periods of time.

The older cousin to microevolution, macroevolution occurs on a much larger and much longer scale. This postulation refers to the theory of common descent and belief in a universal ancestor which accounts for the history of humans, mammals and all life on earth.

The trick, according to Holland, is in the macro. While he believes in the validity of microevolution he claims that we are not, in fact, descended from a common ancestor. Rather, the pastor asserts that all life was created by God. In his symposium, he stated that the theory of common descent is a form of atheistic cover up, an idea conjured by non-believers to explain the origin of life in the absence of God. Holland singles the innately complex nature of cells and other biological functions as evidence that God is responsible for creation. Some aspects of nature are too complex and work too well to have simply been a product of natural selection. Holland also claimed that the vox populi regarding adaptation has been influenced, or in his words “indoctrinated” by Darwinian beliefs in movies, media and public schooling. Throughout the rest of his six-part series he declared that he will continue to disprove Darwinism by examining fossil records, carbon dating and the laws of science.

Overall, I appreciated the opportunity to view a subject from a differing perspective. The freedom to one’s conviction is a precious thing, and I respect anyone as passionate in their principles as the members of The Net. However, in my opinion the purpose of the evening seemed not to just be the open, honest sharing of viewpoints. At times, the content of the message seemed to be rather sensationalistic. Parallels were drawn between Darwinism and Nazism, and held a distinct bias against secular ideals. However, should one become curious about the true message of Evolution: Have You Heard The Other Side? they need only to attend the remainder of the series. The program will continue to take place every Friday night at eight. Pastor Glenn Holland is an expressly approachable man, who took time aside for me to speak with him. I have no doubt in my mind that he would do the same for a similarly curious mind.