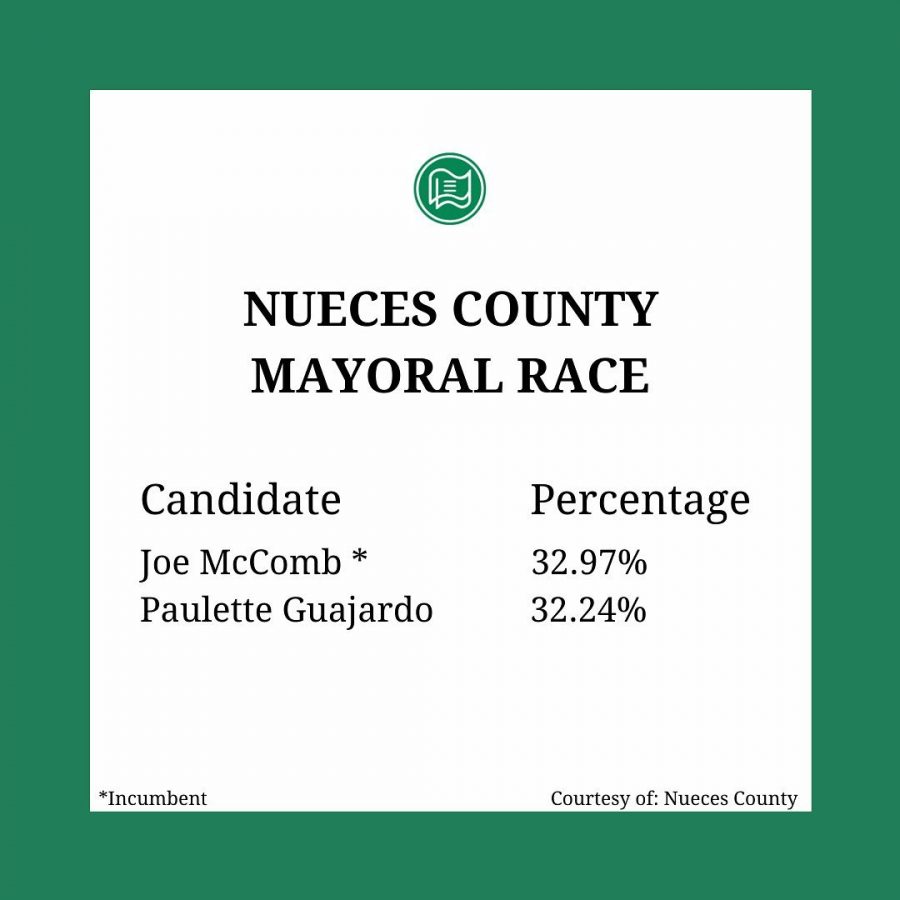 The mayoral race has lead to a runoff, where the individual who gets a majority vote will win

The mayoral election has stalled, with the race going into a runoff between incumbent mayor Joe McComb and former city council member Paulette Guajardo. Both are neck and neck with each other, with both members carrying around 32% of votes. The runoff election will be held on December 15, and will be determined by which candidate scores over 50% of votes.

The results for Corpus Christi City council have already been decided, with Mike Pusley in a tied against the incumbent Michael Hunter. Both Pusley and Hunter hover around 20% of votes, and are followed by John Martinez who scored 13%. With three At-large seats for city council, these three will be our new At-large city council members.

Flitting around the courthouse and helping things go smoothly was Kara Sands, the Nueces County Clerk. Sands contributes the spike of voter turnout to the establishment of voting centers rather than the typical voting precincts. The centers, which allow citizens to vote at any polling location, have been a key factor in increasing voter participation. Sands commented, saying that the most crucial facet of her job was ensuring that voting is accessible to every eligible individual.

A sizable police presence also oversaw proceedings at the courthouse. While cities nationwide have been bracing for potential violence in the wake of the presidential election, Officer Perez of the Nueces County Sheriff’s department commented to say that the city is expected to remain relatively peaceful.

“We were concerned at first, but there haven’t been any planned protests that we’ve heard of.” Perez explained. He also commented that while more officers than normal were assigned to the courthouse, the department felt no need to increase their presence elsewhere. The law enforcement agency will remain on alert as results from federal elections continued to be announced.