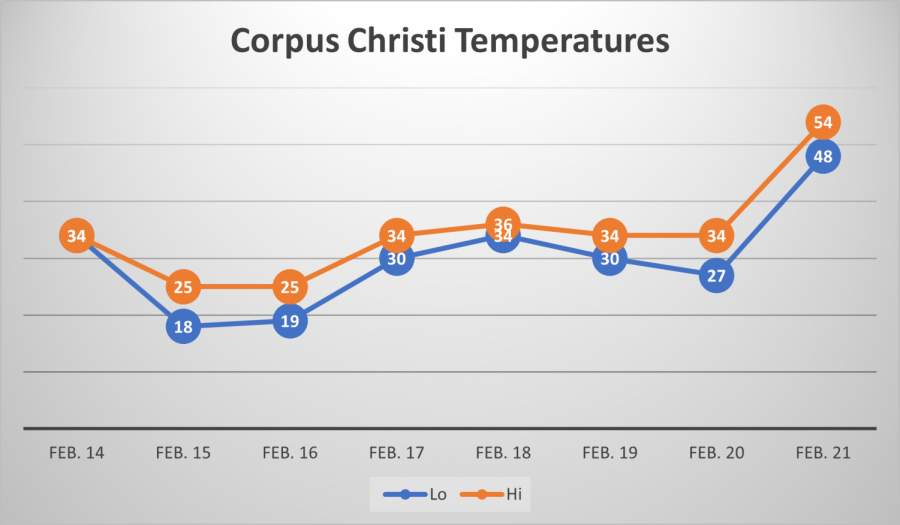 Millions of Texans went a week without electrical power and water, some report not showering for days, while others huddled for warmth under extreme temperatures due to lack of heat within their homes. In extreme cases, death resulted. Due to the changes in climate, chances are this will happen again, leaving many Texans to wonder why did this happen and how can we prevent this from occurring again?

In 2011, after Texas was hit by a massive winter storm, lawmakers advised power companies like The Electric Reliability Council of Texas, or ERCOT to winterize their generators and plants in hopes that large power outages across Texas would not be as severe. ERCOT is an independent organization responsible for 90% of the state’s electrical flow, more than 26 million Texans rely on them for electric power. They are regulated at the state level and overseen by the Texas Legislature and the Public Utility Commission, who recommended but never enforced or provided funding for companies to begin winterizing their power grids. With blame shifting between lawmakers and power companies, it is difficult to pinpoint who is at complete fault for the power outages.

Political science professor Shane Gleason says, “What the Texas legislature could do is they could instruct power companies and say ‘hey, you have a power plant, you must have these minimal precautions in place, you must have heating mechanisms, you must have winterized your power plants.’ Most states in the federal government do require that. In Texas it is recommended but it’s not strictly enforced because Texas is a low regulation state…”

Winterizing Texas’s power grid is task that would cost the state millions of dollars, “that being said there is no precise figure on the economic devastation of this storm right here, but it becomes a question of do you want to pay now or pay later when you have to replace burst pipes… you know things like that,” says Gleason, indicating that investing in winterization could benefit Texas in the long run.

While Governor Greg Abbott, senator Ted Cruz and other state officials were aware of the severity of the storm days before it landed, Gleason says there was not much they could do at that point except “…put resources in place. Preemptively deploy the national guard, preemptively start moving platelets of water, preemptively put out the call to other states to bring out the plumbers, and preemptively open warming centers. Really anything they could have done in the couple of days before the cold front came would’ve all been mitigation. I don’t think prevention would have been possible at that point.”

Gleason says he grew up in Cleveland Ohio, where winter storms lingerie for days and temperatures drop below 20 degrees, so the storm itself was bearable. However, like most Texans, it was the nights without power that were difficult. “Texas houses are not built for the cold and at one point my house was down to 41 degrees, I could literally see my breath.”

Fourth-year nursing student Meli Arc says her power went out, making it difficult for her to complete her assignments and lectures. “it’s frustrating because they still expect us to do the work when I can’t do it, I am trying but it’s hard.

“I know it’s not the professor’s fault, I know they have protocols they have to follow, but it is kind of frustrating for us students who don’t have power or don’t have water, it is hard for us to keep up.” continued Arc.

Arc also mentions she wishes the university provided more resources for its community during the storm.  “The campus has electricity and power, I feel like they should allow us to be like ‘hey we have power at the library’ or ‘hey the university is working with power and has heaters,” open up those resources… and everyone can just warm up and use the internet to get stuff done but instead it is all closed. So, if they would do that then we would feel more supported, like they still cared but it just seems like they closed the door on us, like you’re on your own type of deal.”

Similarly, Third-year nursing student Elaine Trancosso says she wishes some instructors were more lenient during this time, explaining how one professor advised her class to charge their computers in their car in order to complete assignments. “I also had friends stay over at my place because I had power and an extra room, but I just wish some professors were more understanding of our situations.”

“…It was a crazy week with work and school, no power, no water, and with the freezing cold, but I’m just glad we got through it,” says Trancosso.

While the storm has passed, the impact of this storm has yet to be fully realized.