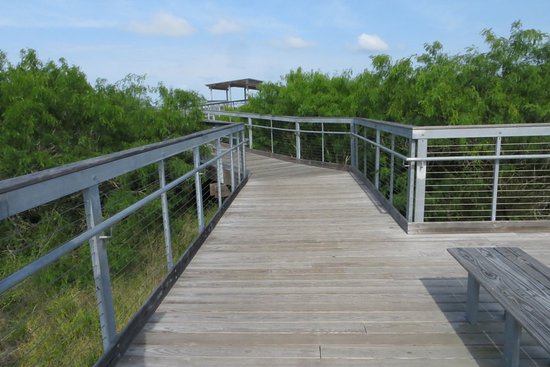 E. Coli bacteria was also found in studies conducted at the Oso Wetlands

In a recent study conducted by several Environmental Science students at Texas A&M University-Corpus Christi, it was found that the university storm drains could be carrying contaminants directly into the Oso Bay and Oso Wetlands. When it rains on campus, the rainwater flows into storm drains located on campus. From here, the water flows directly into the Oso. Along the way, the water could be exposed to contaminants that it carries into the habitats of many key plants and animals for our coastal environment.

In the study, multiple factors were tested at three different sites: the Oso Bay, Oso Wetlands and the storm drains on campus. The factors tested included salinity, pH, temperature and E. coli presence. Wetlands are valued for all of the beneficial services that it provides to humans, plants and animals. Some of these services include maintaining and improving water quality, providing habitats for fish and wildlife, storing floodwaters and maintaining surface water flow during dry periods that we often experience in Corpus Christi.

The data collected showed that E. coli was present in all locations. Coliform is actually a group of bacteria, and many are not harmful. Regardless, this information could mean that there has been possible sewage contamination. This would affect some of the ecosystem services mentioned earlier. Although wetlands help with water quality, it only can take so many contaminants out when the surface water of the bay runs into the wetlands and gets absorbed by the vegetation. E. coli can also affect the health of animals that come in contact with the contaminant. Dogs can become infected by E. coli just like humans, and other animals can serve as carriers for the bacteria.

Another interesting factor that was found during the study involves pH. The pH tested in the storm drains was higher than the pH from the Oso Wetlands and Oso Bay. Higher pH means that the water in the storm drains is more alkaline. Water can become more alkaline as minerals and rocks dissolve into it. Water with higher pH is more susceptible to carbon uptake. Carbon uptake increases carbon sequestration, which results in ocean acidification. On top of the possible contamination, ocean acidification can also harm marine animals and plants. When water takes in carbon, it becomes more acidic. This has an impact on decreasing some elements in the water that some organisms use to make their shells. It also harms plantlife and makes it harder for organisms to survive that feed off the animals that are affected by the acidity.

In order to minimize the problems found during the study, the university can do several things. Green infrastructure is a way to slow down runoff and have as much of the rain water as possible seep into the soil. Green infrastructure depends on plants, soil, and natural systems to remove the runoff. It includes vegetated rooftops, roadside plantings, absorbent gardens, and other natural ways to quickly do away with the runoff. Also, having more vegetation around the storm drains would allow the water to be absorbed more easily. There can also be ways to reuse the runoff on campus so that it does not reach the Oso. Rain gardens or a good amount of vegetation cover would allow the plants to take in the excess water through their roots.

The negative impacts caused by the development on campus are now starting to be seen. The pavement and urbanization of the island causes rainwater runoff to carry contamination to the Oso through the storm drains. Some important local populations of marine plants and animals that could be affected by these findings include mangrove, saltwort and red drum. Mangroves help prevent erosion, saltwort has health benefits and red drum is a popular recreational gamefish. These are not the only important species in the Oso Bay, so it’s important to preserve the Oso Bay.